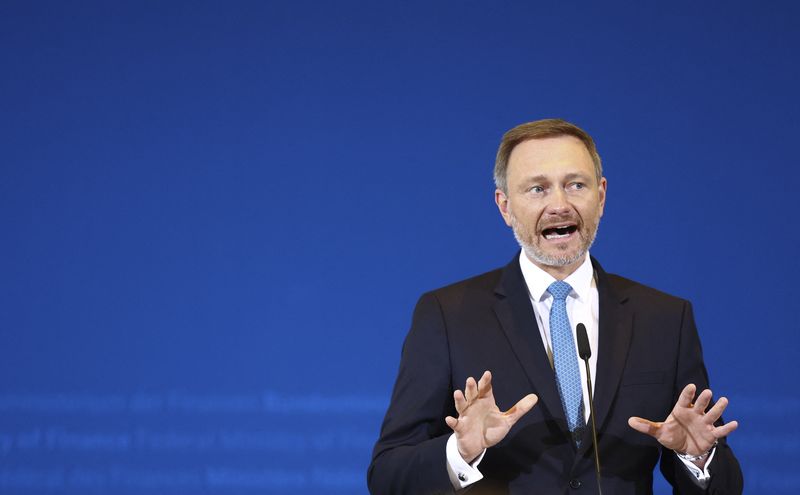 BERLIN (Reuters) -Inflation is the biggest threat to public finances and the European Central Bank should act on its mandate to stabilise prices, German Finance Minister Christian Lindner told Reuters, as the ECB kept its policy stance broadly unchanged on Thursday.

“The ECB’s mandate is to ensure stable prices,” Lindner said in an interview. “The ECB cannot provide economic growth. Rising prices threaten the readiness to invest and weaken consumption. Inflation is the biggest threat to public finances and prosperity.”

Confirming its earlier guidance, the ECB said it plans to cut bond purchases, commonly known as quantitative easing, this quarter, then end them at some point in the third quarter.

Interest rates will, however, only go up “some time” after the end of bond buys and this rise will be gradual, the ECB added.

The German government, like many in the euro zone, has had to roll out tax relief packages, subsidies and loans to help households and companies squeezed by exploding energy prices worsened by Russia’s invasion of Ukraine.

Germany is expected this year to take at least 224 billion euros ($243.15 billion) in new debt to finance increased spending on defence, inflation relief measures as well as on helping Ukrainian refugees, a record coming on top of unprecedented spending during the pandemic.

Lindner said subsidies must be capped and measures must be taken to boost productivity and growth, otherwise economies would be stuck in stagflation, a mixture of rising prices and anemic growth.

With mounting civilian deaths in Ukraine amid Russia’s invasion, Europe’s largest economy is also under pressure to wean itself off Russian gas and oil, as critics say the revenue provides Moscow with vital funds to wage war.

Lindner repeated German government claims that Germany could probably end Russian oil imports in a relatively short period of time without major disruption. Chancellor Olaf Scholz has said this goal was possible by the end of this year.

Lindner said Germany would use its presidency of the G7 to ensure leaders of the world’s 20 biggest economies do not work with Russia as long as Vladimir Putin remains president.

(Reporting by Christian Kraemer;Writing by Joseph Nasr;Editing by Paul Carrel and Bernadette Baum)