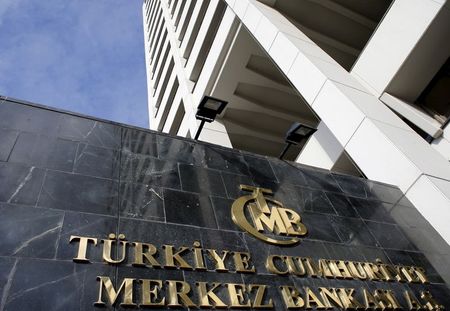 The bank has kept its benchmark rate at 19% since March, when Erdogan installed Sahap Kavcioglu as its latest governor. That makes it one of the highest policy rates in the world – although so too is Turkey’s inflation rate, which touched 19.25% last month.

Ahead of a monetary policy meeting set for 2 p.m. (11:00 GMT) on Thursday in Ankara, here are four key questions:

IS A RATE CUT COMING?

After months of hawkish talk that allowed the lira to recover from an all-time low in June, the central bank has changed its tune in the last few weeks.

Kavcioglu also began downplaying this “headline” inflation figure and instead stressed that a “core” measure – which is lower – is more appropriate given the fallout from the pandemic.

In a speech on Sept. 8, he said a near 30% spike in food inflation represents “short-term volatilities”, so the bank will focus more on the core measure that dipped to 16.76%. He added that policy was tight enough and predicted a falling price trend in the fourth quarter.

Investors have taken all this as a dovish turn that suggests that rate cuts are on the way. Some have warned of a “policy mistake” if they come too soon.

Fourteen of 17 economists polled by Reuters expect easing to begin in the fourth quarter, with two, including the Institute of International Finance, predicting it will start this week.

“Though most expect no rate cut, the bank’s new guidance suggests it would not be surprising to see one on Sept. 23 if it takes a slight deceleration in core inflation as permanent,” said Ozlem Derici Sengul, founding partner at Spinn Consulting, in Istanbul.

HOW LONG WILL ERDOGAN WAIT?

Many analysts say Erdogan appears to be growing impatient for monetary stimulus, given loans are expensive and he faces a tough election no later than 2023. A few say a prompt rate cut could even signal plans for an early vote.

In recent months, the central bank has urged patience due to unexpected inflation pressure brought on by rising global commodities prices and a surge in summer demand as pandemic restrictions eased.

Despite the risk of currency depreciation https://tmsnrt.rs/3neUCLN and stubbornly high inflation, Erdogan will likely get what he wants soon.

A self-described “enemy of interest rates”, he ousted the last three central bank chiefs over a 20-month span due to policy disagreements.

In June, Erdogan said he spoke to Kavcioglu about the need for a rate cut after August.

In early August, he said “we will start to see a fall in rates” given it was “not possible” for inflation to rise any more.

WHEN WILL INFLATION COOL DOWN?

Annual headline inflation should remain high through October and begin to dip in November due to the base effect of a jump late last year, since which it has continued to rise.

The government forecasts inflation will drop to 16.2% by the end of the year, while Goldman Sachs and Deutsche Bank see 16.7%. That should provide a window for at least one rate cut in the fourth quarter, most analysts say.

Yet because Turkey imports heavily, further lira weakness could push inflation higher and complicate or even thwart any easing. High import costs were reflected in the 45.5% annual jump in the producer price index last month.

Another risk is that the U.S. Federal Reserve removes its pandemic-era stimulus sooner than expected, which would raise U.S. yields and hurt currencies of emerging markets with high foreign debt, like Turkey.

Analysts say the biggest problem is the central bank’s diminished credibility in the face of political interference, leading to years of double-digit price rises and little confidence that inflation will soon return to a 5% target.

Ricardo Reis, a London School of Economics professor who presented a paper this month at the Brookings Institute, found that Turkey’s “inflation anchor seems definitely lost” based on market expectations data from 2018 to 2021.

HOW ARE INVESTORS AND SAVERS PREPARING?

When Kavcioglu downplayed inflation pressure earlier this month, the lira weakened 1.5% in its biggest daily drop since May. It has depreciated nearly 15% since Erdogan replaced Kavcioglu’s hawkish predecessor Naci Agbal in March.

Foreign investors hold only about 5% of Turkish debt after reducing their holdings for years.

“With inventories so low in Europe, I can’t see how exports are not going to continue to do well,” said Aberdeen Standard Investments portfolio manager Kieran Curtis.

“It does feel to me like there is more of a move towards loosening from the authorities (but) I don’t think anyone is expecting a cut at the next meeting,” he said.

In Turkey, soaring prices for basic goods such as food and furnishings have prompted individuals and companies to snap up record levels of dollars and gold. They held $238 billion in hard currencies this month.

(Additional reporting by Ali Kucukgocmen in Istanbul and Marc Jones in London; Editing by Hugh Lawson)