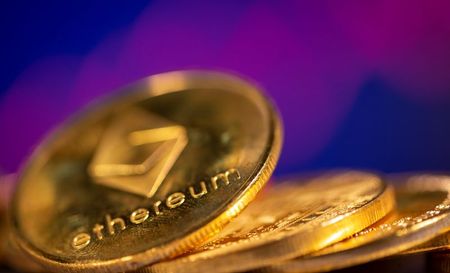 Ether, traded using the ethereum blockchain, was last up around 6% for the day on the Binance exchange where it hit $4,119 around midday in Asia. Bitcoin rose to $59,603 and dogecoin steadied around $0.54.

Bitcoin has doubled, ether has soared more than fivefold this year and dogecoin more than a hundredfold as a euphoric mood has spilled over from bitcoin into other crypto assets.

“I think (crypto has) got a lot more institutional involvement than people who haven’t followed the market believe,” said Chris Weston, head of research at brokerage Pepperstone, pointing to sizeable weekend liquidity.

“And everyone’s been in ethereum. It’s not a meme joke coin, it actually has some application use,” he added, referring to its role in the rise of non-bank facilitated transactions.

The ethereum blockchain has been recently upgraded, which traders think might make it a central player in a trend called “DeFi” or decentralised finance, where digital platforms chip away at banks’ dominance of financial transactions.

The sum of ether tokens in circulation is $477 billion according to CoinMarketCap, compared with $1.1 trillion for bitcoin and $69 billion for dogecoin.

Trade in dogecoin, launched as a joke currency with a dog mascot, has concerned analysts as it is mostly impossible to spend and gains are being driven by a speculative frenzy.

It fell by a third in Sunday trade after Musk, a crypto investor, described it as a “hustle” during a television appearance, but it seemed to find support after he tweeted that his SpaceX rocket company would accept it as payment.

“You really couldn’t make this stuff up,” Rabobank senior macro strategist Michael Every wrote in a note to clients.

“This is not so amusing for an SEC already flagging it will act on crypto, and watching Saturday trading…forget about space: this is a dog eat Doge world in the end.”

(Reporting by Tom Westbrook in Singapore and Stanley White in Tokyo; Editing by Kim Coghill and Jacqueline Wong)