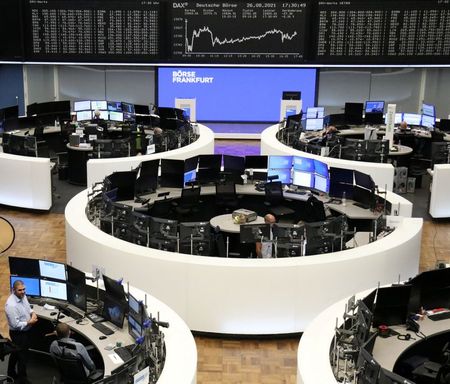 The day’s gains helped the STOXX 600 close 0.8% higher for the week, after trading flat for several days. Commodity-linked stocks were the best weekly performers, as they bounced back from steep losses.

Entra was the best performer on the STOXX 600, rising 4.6% as its peer Castellum bought 11.8% of shares in the firm from the government pension fund in Norway.

The STOXX 600 extended its gains after Powell’s highly anticipated announcement, which reassured investors that programs which have flooded markets with liquidity for the past year will remain in place for the time being.

“Powell’s warning about the risks of premature tightening and repeated reference to “much ground to cover” to reach the Fed’s employment objective hint that the Fed may be on hold until Q4 at the earliest,” said Matt Weller, global head of research at Forex.com.

U.S. stocks touched record highs after the announcement, while European stocks were less than a percent away from their peak, as investors looked past rising COVID-19 cases and concerns over slowing economic growth.

The Delta variant of the coronavirus is only expected to have a limited impact on the euro zone economy, which remains on course for robust growth this year and next, European Central Bank Chief Economist Philip Lane said earlier this week.

Just Eat was the biggest percentage loser on the STOXX 600 on Friday.

French auto parts maker Faurecia gained 2.7% to 42.07 euros after Citigroup hiked the price target on the company’s stock to 56 euros from 41 euros.

(Reporting by Sruthi Shankar and Ambar Warrick in Bengaluru; Editing by Shounak Dasgupta and Jonathan Oatis)