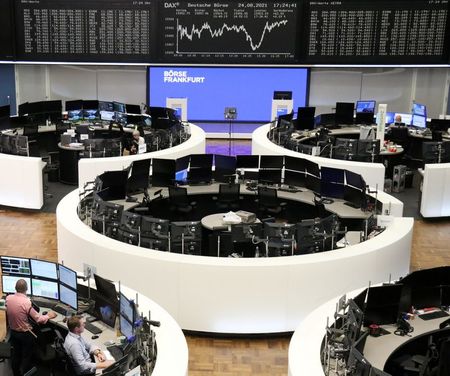 The Reuters poll of 18 fund managers, strategists and brokers surveyed over the past week predicted the STOXX 600 would reach 470 points by year end, just 0.4% below Monday’s close.

A much stronger-than-expected second-quarter earnings season and improving economic data in Europe pushed the benchmark STOXX 600 to its longest winning daily streak in almost 15 years in August.

With most of the results accounted for, European profits are expected to have surged a whopping 151% in the second quarter, according to the latest Refinitiv I/B/E/S data.

And European corporates are set for more quarters of double-digit profit growth, with the European Union pumping more support through its huge post-pandemic recovery fund and vaccines mitigating worries around the COVID-19 Delta variant.

Refinitiv data points to profit growth of 43% and 35% in the third and fourth quarter, respectively.

European stocks are up 18% this year and have outperformed the MSCI’s global stock index, which is up 13% year to date.

But remaining anchored to record levels won’t come without challenges, as investors ponder risks that inflation could lead to a tightening of monetary policy conditions, especially in the United States, while China’s months-long regulatory crackdown on an array of private companies keeps investors on their toes.

Equities will “continue climbing a wall of worry,” said Emmanuel Cau, head of European equity strategy at Barclays, with the regulatory crackdown in China being “another challenge for investor confidence”.

Some $120 billion of market capitalization was wiped off the European luxury space, which shed 14% in two days in August, after Chinese President Xi Jinping delivered a blow to the sector, with plans for wealth redistribution.

ALL EYES WILL BE ON GERMANY

Investors are also taking into account the prospect of political gridlock in Germany in the wake of the upcoming elections, the first without Angela Merkel in more than 15 years.

“All eyes will be on Germany’s federal elections in September 2021”, said Roland Kaloyan, head of European equity strategy at SocGen.

Barclays is not planning to turn more defensive just yet after it moderated its cyclical exposure, as European shares still offer attractive relative value, Cau said.

European indexes are cheaper than global peers as they are heavy in banks and other cyclical stocks which benefit when the economy looks up, and are light on tech and growth stocks for which investors are reluctant to pay hefty premiums amid buoyant economic activity and rising interest rates.

According to the poll, Germany’s industrials-heavy DAX index should gain about 1.2% to 16,050 points at the end of the year against Monday’s close of 15,852.8 points.