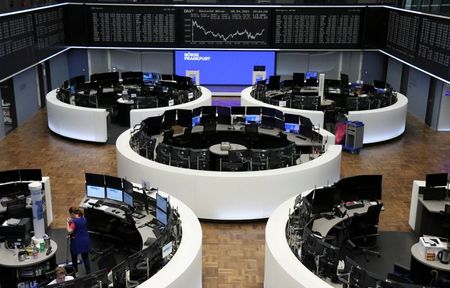 The pan-European STOXX 600 index slipped 0.3%, with travel and leisure stocks easing from all-time highs, and miners retreating after a recent rally.

Deutsche Bank jumped 6.5% to the top of STOXX 600, as strength at its investment bank helped the German bank post a better-than-expected first-quarter net profit.

“At a market level, Europe has performed strongly year-to-date and it’s clear that there has been an anticipation that the recovery will be quite sharp and strong,” said Tom Dorner, investment director for European equities at Aberdeen Standard Investments. “You’re still seeing a rotation in the market in favour of the more cyclical names like banks and autos.”

Investors, however, stayed away from making big bets ahead of the U.S. central bank’s policy announcement due at 1800 GMT. Policymakers are widely expected to reaffirm their stance to keep monetary policy loose until enough economic progress has been made.

Earnings at European companies in the first quarter of 2021 are expected to surge 71.3% from a year earlier, according to Refinitiv IBES data, up from last week’s forecast of a 61.2% jump.

The world’s biggest advertising company WPP rose 2.9% on returning to underlying growth in the first quarter, as clients launched new products and brands.

German food delivery company Delivery Hero jumped 5.9%, as it expects revenues to more than double in 2021.

Among decliners, Lysol maker Reckitt Benckiser Group fell 1.4%, even as the company backed its full-year outlook.

(Reporting by Sruthi Shankar in Bengaluru; Editing by Shounak Dasgupta and Rashmi Aich)