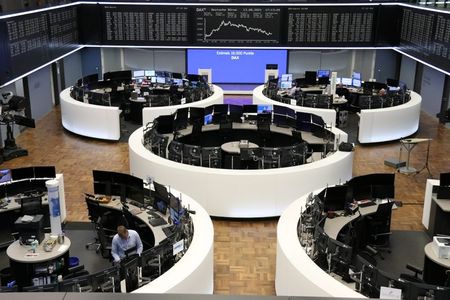 Oil and mining stocks fell about 1.5% each as commodity prices took a hit after Chinese data raised concerns about faltering demand in the world’s major consumer of metals and oil.

Optimism around the second-quarter earnings season, a revival in dealmaking and the pace of vaccinations in Europe drove the benchmark STOXX 600 to record highs last week.

“Having seen European markets eke out incremental gains on an almost daily basis since the beginning of the month, it shouldn’t have been too much of a surprise to see a little bit of a pullback at some point,” said Michael Hewson, chief market analyst at CMC Markets UK.

However, major money houses are mixed about the outlook for equity markets, with Bank of America setting a year-end target of 420 points for the STOXX 600, while Goldman Sachs lifted its 12-month target to 520 points.

All eyes now will be on U.S. economic data due this week and the Federal Reserve’s minutes from its July policy meeting to gauge when and how the central bank will start tightening its monetary policy.

A Reuters poll of economists showed the European Central Bank is likely to announce long-awaited plans to reduce its pandemic-related asset purchases in the next quarter.

Hella, whose shares hit a record high last week on anticipation of a deal, slipped 3.4%.

Lufthansa fell 3.6% after the German finance agency unveiled plans to sell up to a quarter of its 20% stake in the airline.

The broader travel and leisure index was down 1.6% as the fast-spreading Delta variant of COVID-19 remained a concern, particularly as many Asian economies imposed movement restrictions.

(Reporting by Sruthi Shankar and Shreyashi Sanyal in Bengaluru; Editing by Shounak Dasgupta and Subhranshu Sahu)