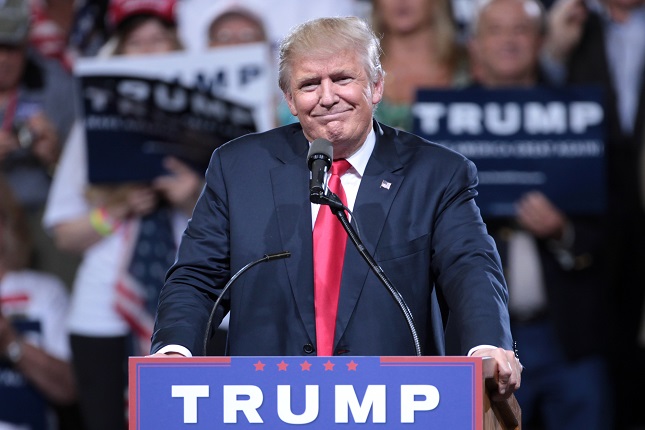 Global share markets are trading lower after Donald Trump elected as the 45th president of United States. Trump’s presidential victory considered negative as his policies reflect uncertainty for US and global economy. Japan’s Nikkei closed down 5.36%, US indices futures are trading lower, S&P 500 is down -1.84%, Nasdaq -2.3% and Dow Jones lost -1.69%.

Although global stocks markets are colored in red, investors are in attempt to reassure Trump’s victory after morning losses.

The Federal Reserve December rate hike is in doubt after Donald Trump’s US presidential victory.

Trump has accused the Fed of keeping low interest rates to help Democratic President Barack Obama and indicated he might replace Janet Yellen after her term ends in January 2018, leading analysts to speculate on whether she would resign earlier.

Odds of a December rate hike fell to as low as 47%. That compares to 82% a day prior to the surprising announcement. However, odds for a rate hike pulled back and currently trading at 76% after markets adaptation of the unpredictable news.

The Mexican peso sinks by the most since 1995 – then it was the Tequila Crisis –  now it’s Donald Trump US president election victory.

Investors concern over Trump’s threats to rip up a free trade agreement with Mexico and building a wall on the southern U.S. border once elected president have made the peso tumbled more than 13% after Trump’s victory.  As of 11:00 GMT USD/MXN trades at 20.013 up 9.26%.

Trades between Mexico and the US has grown to more than $500bn a year since the NAFTA (North American Free Trade Agreement) in 1994, making Mexico the US’s third-largest trading partner after China and Canada.

US Dollar Dragged Down by Fears of Trump’s Victory

US Dollar has weakened versus most currencies after Trump’s presidential win as fears of the new president policies weigh on the US economy.

Safe-haven currencies surged after Donald Trump’s victory . US dollar trades lower versus Euro, British Pound, Swiss Franc, etc.  The Japanese Yen surged to 101.19 from 105.46 and trades at 103.03, down 2.03%. The Australian dollar has also strengthened versus the greenback to trade at 0.7678 losing 1.08%.