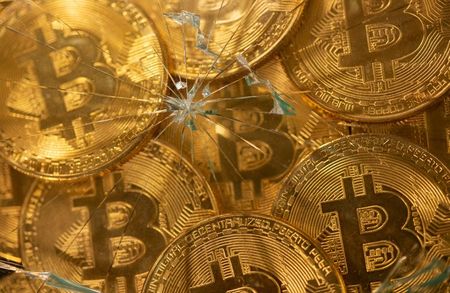 By Saikat Chatterjee and Tom Wilson

Institutional investors have warmed to the crypto sector this year and the platform, which is due to launch in the second half of the year, will initially allow them to trade bitcoin, with second-largest token ether to be added later.

TP ICAP, along with Fidelity Digital Assets and Zodia Custody, launched by the venture capital arm of Standard Chartered and Northern Trust in December, is seeking to make crypto trading akin to that of traditional assets like stocks, bonds and foreign exchange.

The platform will offer post-trade infrastructure with a network of digital asset custodians, the consortium said in a statement, and separate execution and settlement, something widely seen as key to greater involvement of larger risk-averse investors in the emerging crypto market.

At present, crypto execution and custody services are usually rolled up in one venue, increasing credit risks. Amsterdam-based Flow Traders will provide liquidity to the platform.

TP ICAP has broadened its footprint in global capital markets by offering new data and analytics services and rolling out new products.

Dedicated crypto funds have seen record flows this year but major banks offering access must balance growing interest with the compliance headaches long associated with the cryptocurrency sector and increasing scrutiny by regulators.

Still, the move is the latest endorsement of the sector by Standard Chartered, whose venture capital unit said earlier this month it will set up a separate crypto brokerage and exchange platform in Britain and Europe, with Hong Kong’s BC Technology Group.

“Investor interest in this new asset class has exploded dramatically in the last six to eight months,” Duncan Trenholme, co-head of digital assets at ICAP, told Reuters. “In most of our conversations with clients, they want a separation of custodial roles from execution capabilities which is opposite to the models that exist currently.”

TP ICAP launched bitcoin futures and options on CME in 2019 and now plans to launch other derivative products including total return swaps and non-deliverable forwards.

The platform is awaiting approval by Britain’s financial regulator. Neither Standard Chartered nor Fidelity Investments have invested in the platform, ICAP said.