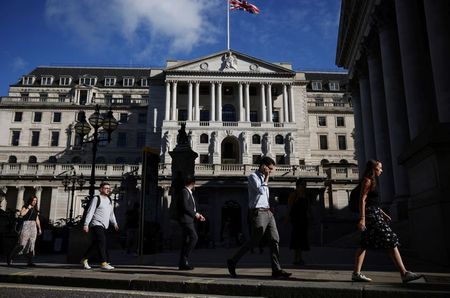 The BoE has been working since February on how to start tightening policy. It is expected to be among the first of the world’s main central banks to begin the process of weaning its economy off stimulus support.

The BoE has said its review of how to coordinate or sequence a rise in interest rates and sales from its government bond stockpile will not signal an imminent change of policy. Instead, it wants to guide the public and markets about its future plans.

The BoE’s benchmark Bank Rate is at a record-low of 0.1% and its bond purchases, which began in 2009 during the global financial crisis, are approaching 40% of gross domestic product, double the share before the pandemic.

WHEN IS THE REVIEW DUE?

The BoE says it will publish the review before the end of 2021. Many economists expect it to come alongside its latest policy announcement and forecasts on Thursday. BoE policymaker Gertjan Vlieghe said on July 26 the review would come “soon”.

The current guidance, dating back to June 2018, states that the BoE will not start to unwind QE, and will reinvest the proceeds of maturing gilts, until Bank Rate is near 1.5%.

WHY CHANGE THE CURRENT GUIDANCE?

The existing guidance makes it unlikely the BoE would start to unwind QE before the next downturn, and over time its holdings could account for an ever-greater share of the bond market.

Rates have fallen globally since 2018 and five-year gilt yields are hovering around 0.3% – much lower than about 1.2% when the guidance was issued – suggesting that markets do not expect BoE rates to reach 1.5% any time soon.

Governor Andrew Bailey has described the guidance as “too prescriptive.” He wants to ensure the BoE has enough headroom – in the form of bonds available to buy from investors – to tackle future crises.

Some lawmakers say the scale of QE distorts financial markets and creates a perception that the BoE funds government spending, jeopardising its credibility.

HOW HAS BOE ANALYSIS CHANGED SINCE 2018?

The BoE set the 1.5% threshold to ensure it could cut rates significantly if the economy needed help after it started to unwind QE.

At the time, the floor for how low BoE rates could go was seen as 0.25%. But the BoE said in February it was feasible to cut rates below zero, giving itself headroom to start selling bonds earlier than previously planned.

Bailey has also talked about the “state-contingent” impact of QE. Rather than always having the same effect on yields, bond purchases may push them down a lot at times of market turmoil, while a slow pace of sales during periods of calm might put little upward pressure on borrowing costs.

The biggest focus for investors is the Bank Rate threshold at which the BoE might start to reverse QE, turning the biggest buyer of government bonds from the market into a major seller.

This would be a fairly conservative option, and effectively factors in a new lower bound for Bank Rate of -0.5% to -0.75%. Analysts at Citi say this is probably the consensus expectation in bond markets. Bond sales would be a long way off: markets do not price in BoE rates at 0.5% until late 2023 while reaching 0.75% might happen as late as 2027.

This could allow the BoE to start reversing QE late in 2022. Markets currently price in a first 0.15 percentage-point rate rise to 0.25% by August 2022. Most economists think it will be later. Long-dated bond yields would probably rise relative to medium-dated bond yields on this news, Citi predicts.

This would be the most radical option, allowing the BoE to start reversing QE before it raises rates, possibly as soon as early 2022, not long after the current purchase programme is complete.

This might appeal to policymakers who worry that a rate rise could derail recovery but think a modest pace of bond sales would do little to push up borrowing costs.

One way for the BoE to reduce its gilt holdings without selling bonds is simply to stop buying new ones when existing bonds mature, as the U.S. Federal Reserve did in 2017.

The BoE may prefer to set targets for reducing bond holdings and continue some reinvestment or hold extra sales as needed. This would also give it greater control over how yields change for different bond maturities.