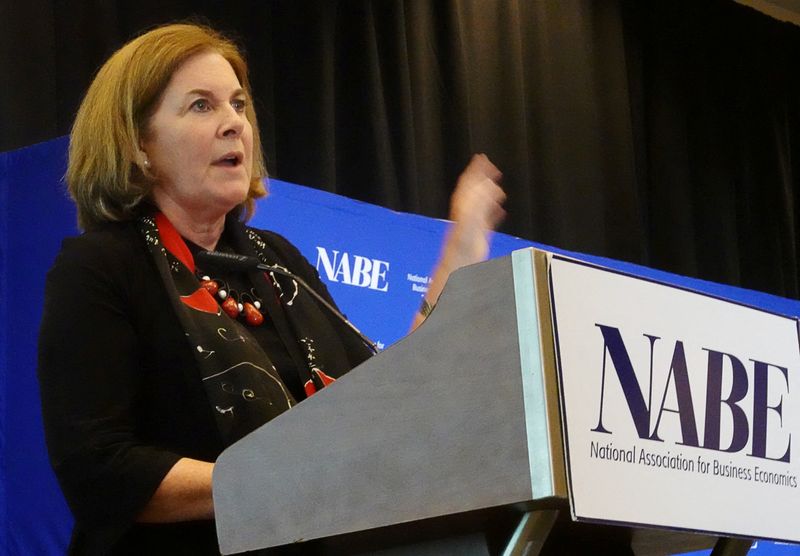 (Reuters) – The U.S. Federal Reserve should begin to reduce its holdings of U.S. Treasury bonds and mortgage-backed securities accumulated during the pandemic in the not too distant future, Kansas City Fed President Esther George said on Tuesday, the latest policymaker to urge a swifter runoff of its balance sheet than during the last tightening cycle.

“My own preference would be to opt for running down the balance sheet earlier rather than later as we plot a path for removing monetary accommodation,” George said in prepared remarks to a virtual event hosted by Central Exchange, a women’s organization.

She said that with inflation running at close to a 40-year high, strong demand, and apparent labor market tightness, the Fed’s current “very accommodative” stance of monetary policy was out of sync with the economic outlook.

Over the past month, the U.S. central bank has swiftly changed course in the face of inflation way above its 2% goal, and is now forecasting an interest rate liftoff sooner and at a more rapid pace than before. Policymakers currently see the need for three interest rate rises this year. The benchmark overnight lending rate has hovered just above zero since March 2020.

It is also accelerating the reduction of its bond buying program to phase out the purchases by March as it removes extra stimulus put in place to nurse the economy through the COVID-19 pandemic.

The next step is when and how to reduce the Fed’s balance sheet which has more than doubled from $4.1 trillion to more than $8.7 trillion over the past two years. George noted that raising interest rates while maintaining a large balance sheet could flatten the yield curve and encourage greater risk-taking in financial markets.

Earlier on Tuesday, Atlanta Fed President Raphael Bostic said https://www.reuters.com/business/feds-bostic-says-three-hikes-fast-balance-sheet-runoff-needed-inflation-fight-2022-01-11 high inflation and a strong economy warrant a rapid rundown of Fed asset holdings to draw excess cash out of the financial system as he advocated completing the process in a couple of years. He also said the Fed may have to raise interest rates at least three times this year, beginning as soon as March.