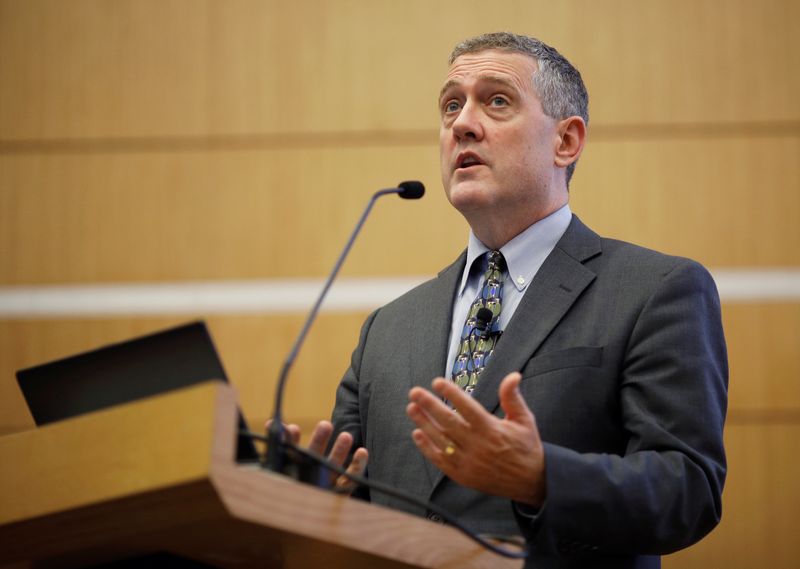 WASHINGTON (Reuters) -St. Louis Federal Reserve president James Bullard on Friday called for a dramatic increase in the Fed’s overnight lending rate to more than 3% this year, a step he feels is needed to catch up with inflation posing a “particularly heavy” burden on families.

In a released statement explaining his dissent against the Fed’s approval of a quarter point increase this week, Bullard said the Fed “will have to move quickly to address this situation or risk losing credibility on its inflation target.”

“The U.S. economy has proven to be especially resilient,” against the pandemic and geopolitical risks, Bullard said. With inflation running above 6%, triple the Fed’s 2% target, Bullard said more Fed actions was needed “to prudently manage the U.S. macroeconomic situation.”

The pace of rate increases he suggested is far beyond even what investors have priced into contracts linked to the federal funds rate.

The Fed on Wednesday approved the first rate hike since 2018, effectively ending its battle against the economic fallout from the pandemic to focus on controlling inflation.

Though most Fed officials see six more quarter point rate increases this year, 7 of the Fed’s current 16 policymakers do, like Bullard, think rates should go even higher by year’s end, a near split in favor of a more aggressive tightening of credit.

He has been on both sides of the inflation hawk-dove divide, opposing plans in 2013 to announce a reduction in Fed bond purchases when inflation was weak, and dissenting in favor of earlier and deeper rate cuts when the economy was slowing in 2019.