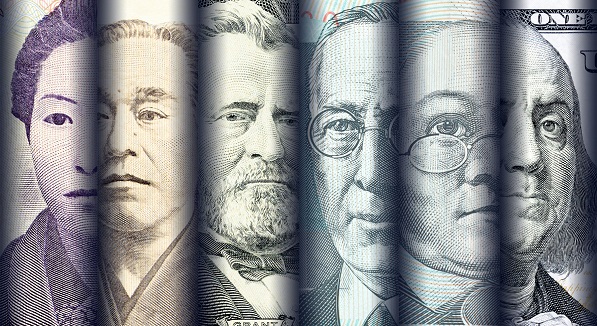 Volatility returned to the currency markets in 2018. The prior year did not provide investors with fear and uncertainty the way 2018 did. The dollar was the main catalyst for changes in market sentiment. Exchange rates were relatively stable until the spring of 2018 and then it became clear that US yields would rise, sending the greenback higher. There were also some severe movements in emerging currencies. The Chinese Yuan weakened substantially along with the Turkish Lira. Moving forward, there are several factors investors should focus on. The ECB will play a key role in 2018, along with political events in both the UK and US.

The Strength in the Greenback

The dollar returned as the king of the currencies in the spring of 2018.  A new Federal Reserve chair began his tenure and quickly installed the belief that the Fed would continue to raise rates multiple times in 2018 and 2019. This led to a rise in US yields pushing the yield differential between major counterparts in favor of the greenback.

Fed Chair Powell’s continued to be hawkish throughout the year, and by October of 2018 the average Fed forecast confirmed the central banks’ intention to increase interest rates three more times in 2019, with another rate hike scheduled for December.  Fed chair Powell in the fall of 2018 said that monetary policy was still accommodative, and there was further to go before the Fed funds rate hit neutrality.  The hawkish tone of the Fed was repeated during the week before Christmas. The fed increased the Fed fund rates by 25-basis points and signaled some softening by forecasting an increase in interest rates by 50-basis points in 2019 instead of the 75-basis point forecast increase they had made during the fall. This was at odds with the market which forecast rates to fall in 2019.

The Dollar versus the Euro which is the most liquid global currency pair has a peak to trough move of nearly 10%. The increase in the value of the greenback might be curtailed by a less hawkish fed. The markets are signaling that rates have reached restrictive levels which might reduce dollar volatility moving forward.

One of the issues is the concept of neutrality. Coming out of the Great Financial Crisis, the Fed wanted to increase interest rates to the point where they had enough bullets to reduce rates should a recession occur. If the Fed left rates as very accommodative levels, then there would be no stimulus to help the economy if it began to falter.

The Fed also needed to unwind its asset purchases. The period of quantitative easing had ended, and the Fed began to wind down its portfolio. This strategy was put in place before President Trump was elected, and there has been continuity between recent Fed Chairs, during the last 10-years. The President has been ultra-critical of the Fed decision to increase rates during 2018. If this occurred in nearly any other country investors would have hammered the currency. Yields would soar as investors extract a steep price for criticism of the central bank.

The pound was a big loser in 2018, as the issue related to Brexit started to heat up. The decline in the pound coincided with strength in the greenback which began in the spring of 2018. The GBP/USD had peaked to trough range of 13%.

During the fall of 2018 reports that the EU and the UK were having difficulty reaching an agreement started to generate headwinds for the GBP. Despite mixed data, some of which showed strength, the Bank of England was hamstrung by the Brexit issues. Ahead of the Christmas break, Prime Minister Terresa May reached an agreement with the EC but was told this would be the last agreement and there was no flexibility.  Unfortunately, PM May was unable to get the Brexit bill passed by the parliament. In fact, her own party the Tories held a no-confidence vote which May was able to survive. This will be revisited in early 2019, as the Brexit saga continues.

The Chinese Yuan was one of the biggest movers during 2018. The peak to trough range was nearly 11.5%.  The currency began to weaken during the spring of 2018 as trade issue between the US and China began to heat up. There were multiple fits and starts and as of the year-end, the rhetoric between President Trump and President Xi continues. Initially, investors thought the weakening of the Chinese currency was a function of the People’s Bank of China’s efforts to offset softening exports with a weaker currency. This would make Chinese exports more attractive. During the latter half of 2018, Chinese economic data began to soften which was foreshadowed by the weakening currency. As of year, end Chinese PMI data moved into contraction territory which points to further contraction in the Chinese economy.

While 2018 was the year of the dollar, there are many issues that can change the narrative in 2019.  The Fed will likely change its tune and reduce the number of rate hikes to 1, instead of 2. US yields already reflect this scenario and should help reduce the value of the dollar. The global economy could continue to weaken which will weigh on the yuan and could further hurt the Chinese currency.

The markets have also failed to discount the volatility associated with political unrest in the United States. President Trump could be impeached which is likely, but nobody believes, the Senate will convict him. If this becomes the case, the markets could become very volatile and could generate significantly headwinds for the dollar. US yields, in this case, would decline instead of rising, making the dollar less attractive. At the same time, investors would be looking for a safe-haven currency which would likely be the yen and the Swiss Franc. Even if political unrest does not occur, a potential recession in the US would weigh on the greenback.