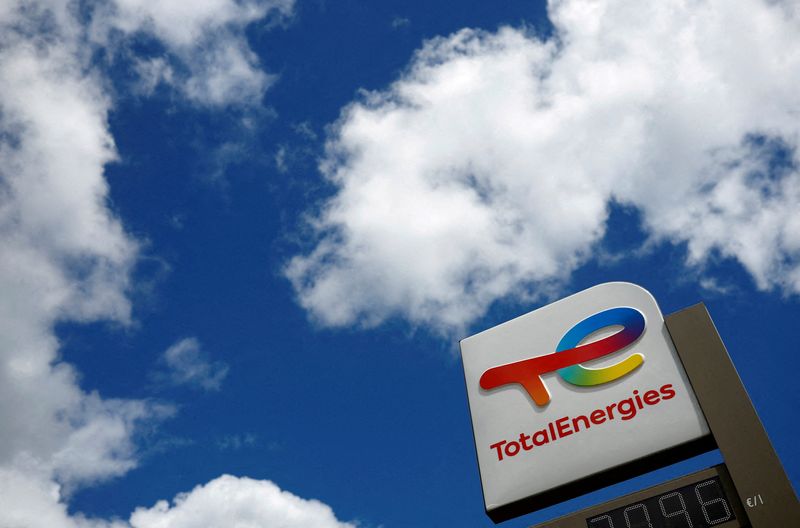 By Forrest Crellin and Rowena Edwards

PARIS (Reuters) -Strikes have disrupted TotalEnergies’ oil products refining and delivery for a fourth day, with four of its French plants hit by continuing industrial action by workers.

Deliveries at the 240,000 barrel per day (bpd) Gonfreville refinery in Normandy have stopped and it is in the process of being shut down, said CGT union delegate Thierry Defresne.

TotalEnergies and trade union CGT said that strikes were also underway at the La Mede, Feyzin and Flanders refineries.

The shutdowns will further strain the supply of refined products in France, with more 60% of refining capacity – or 740,000 bpd – now offline, Reuters calculations show.

A TotalEnergies spokesperson said there is no impending fuel shortage due to the strikes as the company has built up stocks and is importing regularly.

The company reported that there has been about a 30% increase in customers at their service stations since the start of the month when it began offering reduced fuel prices, and that resupplying has continued during the strikes.

“There is no need to rush to the station (for gas),” TotalEnergies said, adding that the fuel price reduction is effective until the end of the year.

However, France’s largest sugar maker Tereos on Thursday said it had to slow output slightly at some factories and TotalEnergies had said the strikes would prevent it from supplying diesel fuel until the end of the week.

“The objective of the strike is not disruption, but to obtain a negotiation on wage measures compensating for inflation,” CGT’s Defresne told Reuters.

It is possible the strikes will continue past Friday, he added.

The industrial action started on Tuesday and was initially planned to last 72 hours.

“It is the unplanned stuff that really gets prices moving, with diesel stocks having made no summer gains,” said OilX senior oil analyst Neil Crosby.

“The wave of strikes in France took the market by surprise and there is uncertainty about its duration.”

The refiner has been forced to limit product supply to its customers within the terms of its contracts, a company spokesperson told Reuters on Wednesday.

Outages in France’s refining sector are creating a level of uncertainty in refined oil trade amid a heavy oil refinery turnaround season in Europe this autumn.

(Reporting by Forrest Crellin in Paris and Rowena Edwards in London; Editing by David Goodman and Jonathan Oatis)