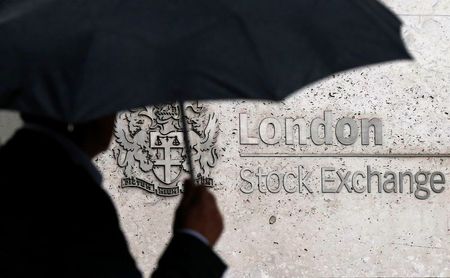 Limiting the advances, however, were pharmaceutical stocks that weakened 1.1% to be the top losing sub-index.

“Basically we have been trading waters while we look across Europe and that seems to have been the trend throughout the day,” said Craig Erlam, senior market analyst at Oanda.

“I think at this point all eyes are on the Jackson Hole meeting, so it wouldn’t be a surprise to see this kind of market behaviour.”

The FTSE 100 has added 10.3% so far this year, but is still 8% away from its record highs hit in 2018 as an economy slowing due to weaker consumer demand, and risks around central banks pulling back monetary support sooner than expected, have weighed on the FTSE 100 recently.

In a bright spot, official data showed that British retailers saw the biggest surge in spending in almost seven years this month and orders hit a new high. However, stocks fell to the lowest levels on record, putting pressure on prices.

Meanwhile, real estate stocks fell 0.3% after official data showed the number of homes sold in the UK fell by more than half last month after the scaling-back of a tax break designed to encourage home purchases during the coronavirus crisis.

Rio Tinto gained 3% after the miner said it had restarted operations at its Richards Bay Minerals project in South Africa after a furnace in July was shut down, affecting the supply of raw materials.

Wood Plc dropped 0.2% after the engineering and consultancy firm forecast lower annual revenue and reported a 14.1% fall in first-half profit.