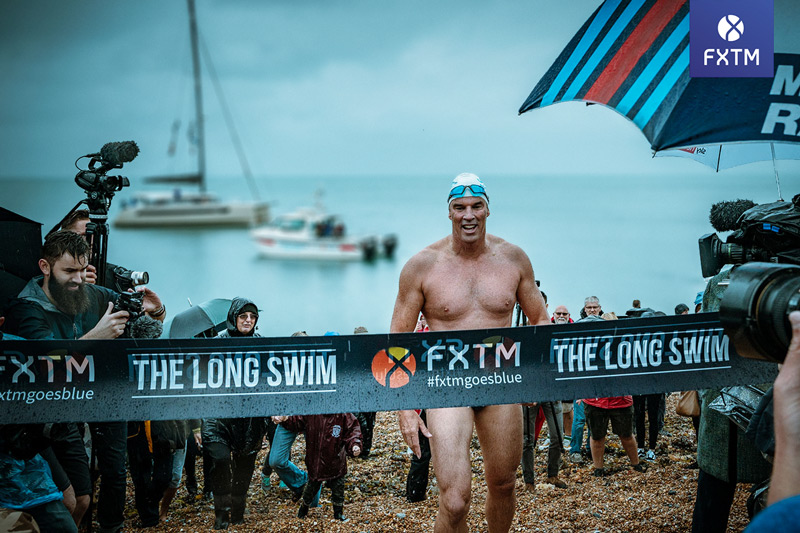 The Long Swim – a first-of-its-kind 530km swim along the breadth of the English Channel – has been completed in under 50 days. On Wednesday, the 29th of August, Lead Partner FXTM hosted the emotional finale at Shakespeare Beach in Dover, where the forex broker’s Brand Ambassador and dedicated Patron of the Oceans for the United Nations, Lewis Pugh, crossed the finish line at 13:30 local UK time. FXTM Senior Staff Writer Nikola Grozdanovic writes about the completed challenge and how the partnership highlights key values for the broker.

In many ways, education is at the heart of FXTM’s values – the broker is known for regularly hosting seminars and workshops for its traders, as well as webinars in multiple languages for its global audience. This attribute, perhaps more than any other, is perfectly aligned with Lewis Pugh and the world-first challenge he’s just completed. Pugh’s driving motivation for The Long Swim was to raise awareness and educate the public about the perilous state of our oceans – a crisis caused by three main factors: plastic pollution, climate change, and overfishing. Scientists estimate that, if the situation continues to deteriorate at the same pace, there may be more plastic than fish in the ocean by the year 2050.

Pugh’s overall campaign, Action for Oceans, a planned series of challenges which has been launched by The Long Swim, is to try and get governments to take action and secure 30% of the blue waters as Marine Protected Areas (MPAs) by the year 2030. As Lead Partners of The Long Swim, and for future activities planned with Lewis Pugh as the broker’s Brand Ambassador, FXTM has initiated its first corporate social responsibility campaign with the hashtag #FXTMGoesBlue and the slogan ‘Our Oceans. Our Time’.

“At FXTM, we believe in sustainable livelihoods based not only on grounded economic practices but on protecting the environment as a whole for future generations. In this way, we are more than just a forex company,” comments FXTM’s Chief Commercial Officer, Lex Webster. “The urgency of the issue facing the oceans is part of the reason we are thrilled to partner up with Lewis.”

“On behalf of all of us at FXTM, I congratulate Lewis for accomplishing this incredible feat and for the resilience he’s shown throughout The Long Swim. We know there’s plenty of work still to do to protect our oceans, and FXTM happily backs Lewis as our latest Brand Ambassador on his continued mission to spread the message about the importance of plastic-free seas. FXTM is founded on the principles of education, integrity, responsibility, and care for its surroundings and environment; this makes Lewis and what he stands for a perfect fit for our brand.”

On Shakespeare Beach, a popular starting point for swimmers attempting the English Channel crossing from Dover to Calais, France, Lewis Pugh finished a 530km swim which is roughly equivalent to 16 Channel crossings. He is now the first person to ever swim the entire length of the English Channel while abiding by the rules of the Channel Swimming Association – that is, wearing just a pair of Speedo briefs, goggles, and a cap for protection.

As Lewis crossed the FXTM finish line in Dover, a huge crowd greeted him in what turned out to be an emotional conclusion. Media representatives, sponsorship partners, the general public, officials from the Channel Swimming Association, and other professional swimmers created a rousing atmosphere. Most importantly of all, the UK’s Secretary for the Environment, Michael Gove, was among the crowd, greeting and congratulating Lewis on what he has achieved, vowing to take legislative action for more secure protection of the UK’s waters.

The Long Swim has successfully fulfilled its mission of educating the public and raising awareness for a vital cause that impacts us all. However, in many respects, this is just the beginning. Lewis will now continue to spread the message while traveling across the world – and FXTM will proudly be standing by him all the way.

Find out more about this partnership by clicking here, and follow #FXTMGoesBlue on social media channels. To discover more about FXTM’s award-winning products and services, click here.