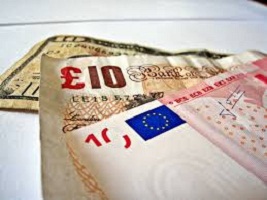 The GBP/USD rate has remained reasonably stable in the past 24 hours, and currently then pound is buying $1.449, appreciating only slightly from $1.448 at the beginning of trading GMT.

Both currencies fared well, in the face of several releases of negative data over their economies.

The UK has suffered a triple blow as purchasing manager’s indexes on construction, manufacturing, and the services sector, which represents four fifths of the UK economy, all delivered bad news.

All of them suggesting that the UK economy is now growing at its slowest pace for three years.

In the United States, claims for unemployment benefits rose by 17,000 for April, figures from the Labor Department revealed.

The euro has risen by a slender margin against the greenback this morning CET, with EUR/USD at $1.142, from $1.14 from the start of today’s exchanges.

From yesterday morning CET, the euro has fallen as it appreciated against the dollar to reach buying $1.15.

LMAX Exchange in their daily report, said that the lighter trading conditions, and a pre event risk position with regard to today’s all important non-farm employment result from the United States, were the drivers of the latest price action.

Also, the forex company believed that there was no new insights from yesterday’s  economic bulletin from the European Central Bank , but perhaps helped to fuel existing bearish sentiment for the single currency.

The dollar also gained ground on the euro, despite hawkish comments over a June rate rise from Atlanta Federal Reserve President Dennis Lockhart, which was echoed by his St Louis counterpart James Bullard, who was also undecided.

Markit’s latest purchasing manager’s index (PMI) for April has placed the retail sector’s latest score down to 47.9, from 49.2 that was recorded in March.

The PMI, which tracks the performances in the sector across Germany, France, and Italy, found that retail sales have declined at the beginning of the second quarter.

Behind the downturns was the fall in sales in both France and Italy, while in Germany, Europe’s most powerful economy, retail activity slowed to a three month low.

Although German retailers still were the best performing ones of the three, Italian sales fell at a modest rate.

The French sector suffered the most, an accelerated drop in sales that was the worst they have faced since February 2015.

Cost pressures for retailers also increased, as price inflation spiralled upwards to a three month high in April, but remained beneath the long term average.

Employment in the sector was broadly stable during April, this halts the trend from over the past five months, where employment levels increased.

In Germany, despite the weaker growth, there was job creation reported in the survey, but this was offset by reductions in employment in France and Germany.

Compared to 2015 , retail sales were lower in April this year, which was in contrast to the year on year for March.