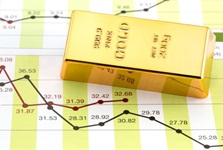 My colleague and resident gold bug, Robert Appel, BA, BBL, LLB, is the smartest guy I know when it comes to understanding and explaining what’s happening with precious metals. Robert recently penned this commentary/forecast on the yellow metal and he was kind enough to give me permission to share it with my readers. Listen carefully:

“With additional damage seen in gold and the mines, the gold wars continue.

For the record, and this is easily verified on any one of a number of sites, gold prices held Tuesday overnight in Asia, but suddenly Wednesday morning they entertained massive selling the moment London opened.

London is the ‘home’ of the original ‘Gold Fix.’ We are not making that name up. They actually use that term. In prior reports we have shared with readers ‘leaked’ minutes of discussions among the London traders (usually from the late 90s, there is always a time lag) when they discuss among themselves the importance of using their bourse to keep the price down.

That was then. This is now.

It is record-breaking. We are seeing long-term gold bulls simply give up. This is astonishing.

We’ve attached an updated chart on Comex gold inventories. We realize that some reporters will tell you that such charts are meaningless, and the Comex can snap its magic fingers and find new gold whenever they need it.

Other, wiser commentators have noted (look at the chart) that a potential default on delivery was looming in April and was no doubt directly responsible for the April take-down, aided and abetted by the media, your hard-working government, and Goldman.

This all may be too much for some readers. We understand.

But our stance has not changed. If anything, the value at the bottom will be even greater—when the bottom is hit.

Understand that with paper gold trading BELOW THE COST OF PRODUCTION very little new gold will be entering the market unless there is a turnaround.

We give the gold manipulators great credit for creating an environment of fear where even long-term bulls are wondering if they have made the mistake of a lifetime.

And wondering if indeed we have ushered in a great new era of prosperity and wisdom where gold has no value but the words of politicians, on the other hand, can be taken to the bank…?

But overall nothing has changed.”

Can the housing market keep improving at this pace?

Dear reader, home prices increasing in the housing market is just one step in the right direction, but it’s not the destination. As it stands, I see home prices getting derailed from their upward trajectory before long.

Keep in mind that these housing market statistics are actually from the past. Consider that the S&P/Case-Shiller index is actually a three-month average and that its April numbers were strongly influenced by data compiled in February and March.

On June 19, a lot changed for the housing market’s future—the Federal Reserve said it will pull back on its bond purchases.

As a result, the U.S. bonds saw their yields skyrocketing. This phenomenon led to hikes in the mortgage rates. For example, 30-year fixed mortgage rates have gone up more than 32% since the beginning of May alone, and they appear to be continuously increasing. The 30-year mortgage rates were hovering around 3.4% in early May, and now they are beyond 4.5%. (Source: Bankrate.com, last accessed June 26, 2013.)

On a recent note; the Mortgage Bankers Association (MBA) reported that the number of mortgage applications filed in the U.S. housing market declined three percent for the week ended on June 21 from the previous week. In the same period, it also reported a decline of 67% in home refinance applications—the lowest level since July 2011. (Source: MarketWatch, June 26, 2013.)

Not only do rising mortgage rates mean homes will be less affordable for already struggling Americans, but it may also drive away new buyers from entering the housing market.

But in reality, first-time home buyers—those who buy a house to live in it—are the actual indicator of real recovery in the housing market. If you think you missed out on the homebuilder stocks and are thinking of getting into them now, I’d think twice about it. The Dow Jones U.S. Home Construction is down 18% since mid-May, while the broader market is down only 2.5% during the same period. The homebuilding stocks themselves are telling us something is up in the housing market, adding credence to my skepticism of the so-called “housing recovery.”