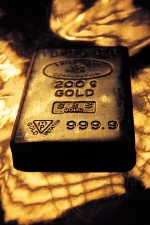 Back in April, I said gold was looking bad on the chart and that as long as the stock market continued to advance higher, the prospects for gold were dim. (Read “Is Gold’s Near-Death Crisis Over-Exaggerated? Concerns of a Market Meltdown May Not Be.”)

Fast-forward two months, and while stocks have been in a minor correction, there continues to be distaste for holding gold.

The reality is that inflation is benign and will likely stay that way for a few years. The world’s central banks continue to drive easy money into the system and investors are looking elsewhere to make money, ignoring the precious metals, especially gold, traditionally a safe-haven investment.

The problem now is that there’s really no need for a safe haven at this juncture.

I even feel that gold is vulnerable to $1,200 on the chart. Take a look at the long-term chart of spot gold featured below. The lower support appeared to be in place until the slide on Wednesday to the $1,224 level. The threat now is that gold could continue to break down and make a move toward $1,200. If this happens, we could actually see a move down to the $1,100 level, based on my technical analysis.

Of course, the futures market appears to be betting on a rally. The contracts all the way out to December 2018 show the spot price above $1,200, but I have seen this more positive sentiment before, and it subsequently failed to pan out.

Even if gold holds, the upside over the next several years appears to be limited. The highest level is $1,407 for the December 2018 contract.

My view has not changed. I have little confidence in gold as an investment. You could make some money trading the commodity on weakness and selling on a rebound, but in my opinion, the bear market in gold is here to stay—at least for the immediate future.

Of course, some gold bugs talk about the fact that the ore is a limited commodity based on what is in the ground, but this supply needs to be found and extracted.

Also, India and China may be major buyers of gold, but both of those countries are facing some serious growth issues; I don’t see the demand surging to levels where it will impact prices.

For now, I just don’t see the heavy demand that could spark gold to another rally, so I’d suggest you stay out of the yellow metal unless you’re a trader. Holding gold for the long term isn’t going to make you rich.