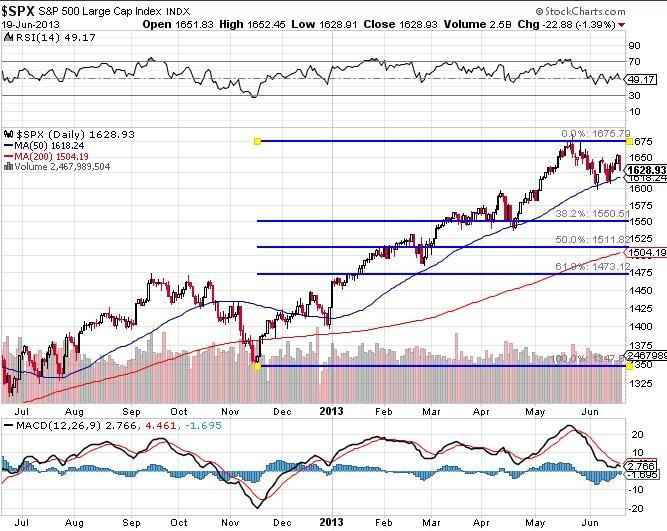 While Fed Chairman Ben Bernanke’s announcement that a reduction in the asset purchase program will begin later this year was not a surprise to me, stocks felt the impact as selling ensued across the board.

However, though the S&P 500 did pull back, it is still near its all-time highs. Over the past few weeks, I have been recommending that readers reduce their overall exposure to the S&P 500, and any other assets that have benefited from the stimulus program for that very reason.

While Bernanke was careful to note that this did not mean that monetary policy would begin tightening immediately, it is clear that the next move will be toward a reduction in monetary stimulus.

This will certainly impact the stock market and any other asset class that has benefited from easy monetary policy. Many investors in the S&P 500 have been blindly buying, not basing their buys on fundamentals, but rather, assuming the Federal Reserve will continue monetary stimulus indefinitely.

As I stated many times before, the current monetary policy program by the Federal Reserve is only temporary.

The chart for the S&P 500 Index is featured below:

As I previously mentioned, the sell-off in the S&P 500 is only minor in relation to the magnitude of the movement that’s been going on since November. Having said that, when the Federal Reserve begins reducing its asset purchase program later this year—I suspect it will be either in September or October—this will coincide, in my opinion, with a much larger sell-off for the S&P 500.

History is also on the side of caution for the S&P 500 during the months of September and October. Those two months are notorious for having poor performance records, including several famous crashes.

For the S&P 500, the Fibonacci retracement levels show approximate regions that investors can use as a roadmap for possible areas to target.

Naturally, we will have to digest much more economic data before the Federal Reserve makes any such move. Because the S&P 500 has discounted much of the revenue growth over the next year, at current levels, I think it’s priced close to perfection, leaving significant downside risk.

With the summer upon us and the Federal Reserve close to making a significant shift in monetary policy this fall, I would look to raise cash that one can deploy to buy stocks once the S&P 500 drops to levels that are attractive once again.

For long-term investors, the time to accumulate the S&P 500 is when the market sells off significantly—not when it’s at all-time highs.