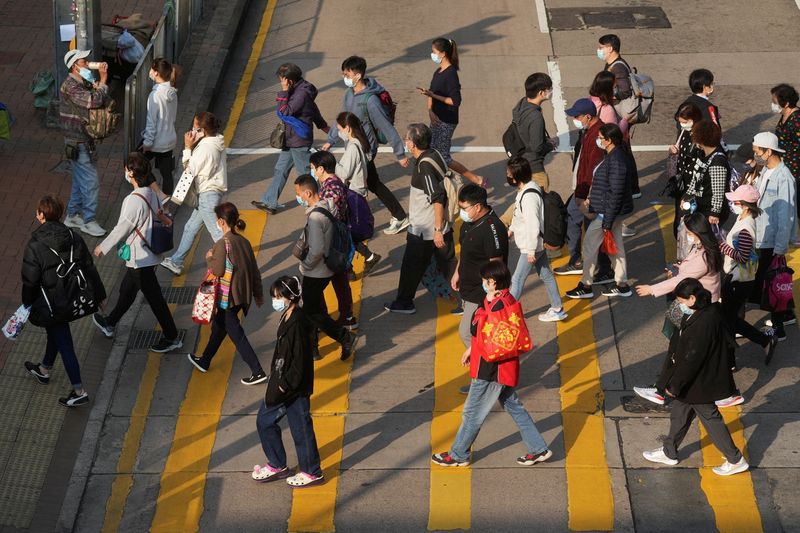 HONG KONG (Reuters) -Hong Kong leader Carrie Lam said on Monday there were no plans to tighten strict social distancing measures as the Chinese-ruled territory battles to contain a coronavirus surge that has submerged its health system amid soaring deaths.

Lam said there was limited room to tighten further, with the global financial hub already having put in place the strictest measures since the pandemic started. Gatherings of more than two people are banned, most venues are shut – including schools – and masks are compulsory everywhere, even when exercising outdoors.

“The government has to be very careful before tightening social distancing measures further … with the need to consider the mental health of citizens,” she told a daily briefing.

Lam said last week that the government had no time frame for a potential compulsory mass testing of Hong Kong’s 7.4 million residents, most of whom live in tightly packed high-rise apartment blocks sharing lifts.

Hong Kong has reported more than 700,000 COVID-19 infections and about 4,200 deaths, most of them in the past three weeks. The former British colony has followed mainland China’s “dynamic zero” policy which seeks to curb all outbreaks as soon as they occur, instead of trying to live with the virus.

Hong Kong’s borders have been effectively sealed for two years with few flights able to land and most transit passengers banned.

But deaths have spiked, particularly amongst its mostly unvaccinated elderly, with the city registering the most deaths per million people globally in the week to March 10, according to data publication Our World in Data.

Lam’s comments came after China reported a surge in new local coronavirus cases on Sunday, more than triple the caseload of the previous day and the highest in about two years.

Some mainland Chinese internet users took to social media platforms to express anger at Hong Kong, saying it had failed to control its outbreak and blaming it for latest surge in infections.

“Shenzhen people have been scolding Hong Kong every day for the past month. It’s very clear that it has caused so much trouble for others,” said one internet user, called Chen Shui, posting on Chinese social media platform Weibo.

The sprawling city of Shenzhen lies on the mainland’s border with Hong Kong.

The city is building about 90,000 isolation units in total, with the help of mainland authorities, to house people with mild or no symptoms. They have been opening in stages with all expected to be completed in coming months.