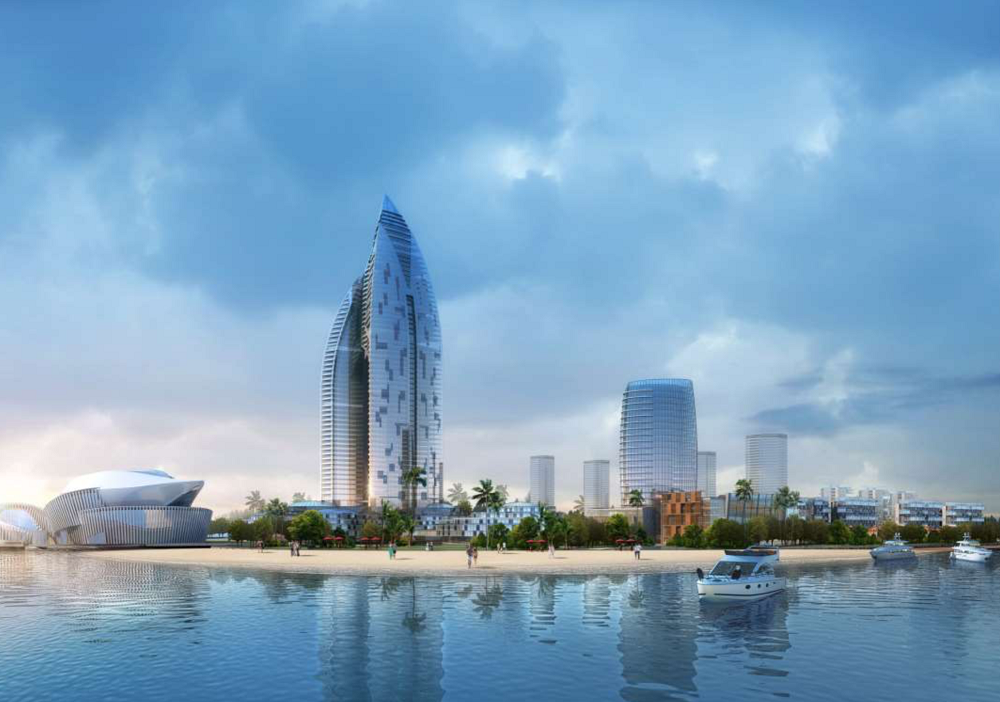 The application of this technology in tourism can be very versatile as well. One can use it for keeping a record of the luggage and visas, passengers check-in, booking services without commission fees, and even building tourist smart cities.

Over 835 acres off the coast of the Malaysian city, Malacca, will soon be turned into a tourist blockchain-city with extensive infrastructure. The project was launched by China Wuyi and SWT International Sdn Bhd and supported by the government of China and several major corporations, including Poly and CCCC.

China Wuyi is a big construction and engineering company, a subsidiary of the Fujian Construction Engineering Group and one of the 250 largest international contractors according to the Engineering News-Record.

The city project was designed by another large company, CPG Corporation. It is known for the development of a few popular buildings in Singapore such as Changi Airport, the Parliament House, and Solaris Business Park.

In total, 635 acres of reclaimed land will be used for the construction of Melaka Straits City. Another 200 acres of the marine area will be kept for building chalets and water recreation facilities. This territory belongs to the local company, SWT International Sdn Bhd. Its main areas of interest are tourism and sustainable development. The company’s activity is based on the innovative production of energy for further waste incineration.

China Communications Construction Company is working on the construction of transport infrastructure, and China Poly Group Corporation deals with issues of capital management and resource allocation.

Developers intend to make Melaka Straits City the leading tourist destination in Malaysia. The Ministry of Tourism of China foresees 3 million tourists to visit it every year. 5 gorgeous boutique hotels and about 100 villas with a beautiful sea view and private access to the beach will be built along the coastline.

A huge educational cluster will take thirty-two hectares with kindergartens, colleges, universities, and student dormitories. Four campuses which are expected to promote Melaka Straits City as a regional education center will be among the most important elements of the tourist smart city.

To find out more details about the project development, we interviewed the official representative of Melaka Straits City, Lim Keng Kai.

Is Melaka Straits City going to look like a real city of the future?

Lim Keng Kai: Partly, yes. The working methods of our city planner CPG Corporation are famous for being innovative. Its style is highly noticeable in the  Melaka Straits City architecture as well. For example, the boutique hotels and the exhibition center designs look so futuristic, they will probably become the main attractions of the city.

But Malacca is a city with a rich history, and we are willing to emphasize this. Over different periods, it was colonized by the Portuguese, the Dutch, and the British, and in 2008 it was included in the UNESCO World Heritage Sites List. That is why we’ve planned to build a distinctive cultural street in the center of the city. It will be inspired by the styles of different colonial eras and is going to make tourists familiar with Malaysian traditions and history.

Shopping centers with a duty-free zone will be built in the city as well, which will not only attract visitors but also have a positive impact on the country’s income growth.

Among other things, two hectares of land will be allocated for the construction of a national conference center. The building, equipped to accommodate 20,000 visitors, can become an official meeting venue for the government and international delegations. A water theme park – the largest in Southeast Asia – will become another attraction of Melaka Straits City. The project feature is a combination of sea and land rides.

The process of construction and subsequent development of Melaka Straits City will be carried out based on the blockchain technology. In order to create a first-class tourist destination, the developers are going to introduce this technology to the traditional industry. Technological innovations will be focused on the improvement of the fundamental infrastructure and integrated with the city statistics. The creators put emphasize on safety and security management of all smart city systems.

How exactly will Blockchain be used in Melaka Straits City?

Lim Keng Kai: The basis of the blockchain technology in the Melaka Straits City will be DMI platform with DMI coin. It will mainly be used in payment of government-based services in the city. DMI will also feature an exchange that can allow tourists who visit Melaka Straits City to exchange their fiat currencies for DMI coins that they can use freely.

When tourists visit Melaka, they will be required to exchange their money into digital currencies that they can use to pay for services using their mobile phones or computers. The DMI web application will be available on PC and the mobile applications will run on Android and iOS devices to provide flexibility regardless of the preference of the individuals.

The businesses and merchants in Melaka Straits City will have accounts and a unique QR code where tourists simply scan using their codes and make payments. This is easy mobile banking that can be done in seconds. The transactions will all be stored in the DMI blockchain where any issues that arise can be resolved.

The main purpose of the Melaka Straits City project is to build a tourist city based on blockchain technology.  In particular, it implies the creation of a new tourist blockchain city brand which will enhance tourism development in the country and improve education.