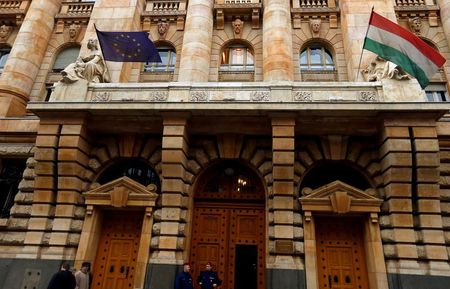 The decision, which followed a warning by top central bankers that a cycle of rate rises would begin this month to arrest a rise in inflation, exceeded the consensus forecast for a 25-basis-point increase in a Reuters poll.

The NBH, the first European Union central bank to raise rates in the aftermath of the COVID-19 crisis, left the interest rate on its overnight deposit rate steady at -0.05%, as expected.

At 1219 GMT, the forint traded at 355.35 per euro from 354 just before the announcement. It is also well off its strongest levels around 345 hit early this month in anticipation of the rate hike.

Foreign currency dealers said the forint eased due to lingering uncertainty over the bank’s next move on the one-week deposit rate, which at 0.75% now sits below the base rate. Its next scheduled review is due at a weekly tender on Thursday.

Reflecting the high degree of uncertainty over the decision, forecasts for the first Hungarian base rate hike in nearly a decade ranged from 15 to 30 basis points in last week’s survey, although some economists subsequently projected an even larger increase.

The central bank will publish a policy statement and updated economic forecasts at 1300 GMT.

“With the recovery set to strengthen and inflation likely to increase further in the coming quarters, we expect additional interest rate hikes in the second half of this year,” said economist Liam Peach at Capital Economics.

“We don’t get the impression that the (NBH) will want to tighten policy aggressively, but with inflation set to remain outside its tolerance band until early 2022, we think that rate hikes in September and possibly December are most likely outcomes.”

The NBH, whose governor Gyorgy Matolcsy is a key ally of Prime Minister Viktor Orban, has gradually cut its benchmark base rate to support the economy in recent years, to a record low of 0.6%.

However, as the economy recovered quickly from the third wave of the pandemic, inflation also rose above expectations, while an expansionary budget passed for the 2022 election year compounded the bank’s worries over inflation.

Hungary’s economy is expected to record a double-digit jump in growth in the second quarter, while annual headline inflation ran at 5.1% in May, unchanged from April and overshooting the bank’s 2% to 4% policy target range by a wide margin.