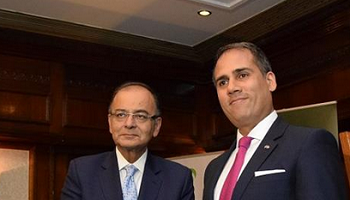 I write to you from India, before hitting my trading desk at the start of a new week. Here in India, the annual budget by the Finance Minister, Arun Jaitley, has been interpreted by some as yet another death knell for Cryptocurrencies. They’re wrong. It’s the opposite.

India is one of the main countries that is pioneering the way to regulate cryptocurrencies. India is cracking down just like some of the other governments while still continuing to embrace the blockchain technology for its incredible encryption and the widespread technological benefits. While cryptocurrency may have delivered a product that is not deemed to be helpful for Indian business, the technology behind it is something being embraced in many industries.

India’s central bank issued a series of warnings quite recently on the process of cryptocurrency investment. Arun Jaitley only stated the obvious –  that the government would not be recognizing crypto as a legal currency, tender or coin. While these measures seem quite extreme, these are not a ban on the idea of cryptocurrency.

What Does It Mean for Investors?

The government will not be banning exchanges directly and there is very little chance that the government could actually penalize individuals that have cryptocurrency in any format as part of their portfolio. (6,7)

Businesses that were considering taking cryptocurrency may want to use caution as the government currently does not consider any type of cryptocurrency to be a legal tender under the announcement from Jaitley. Continuing to accept legal tender only recognized and defined by the RBI should be the best path moving forward. Accepting these types of payments and watching out for new blockchain technology solutions for e-commerce could be one of the best paths for your business as part of this announcement.

Why Has this Announcement Been Brought Forward?

One of the greatest reasons why this announcement was included as part of the finance announcements by Arun Jaitley starts with the basis for the current leadership. Prime Minister Narendra Modi, as well as the BJP party, won the hearts of the people in 2014 by focusing on an anticorruption based platform. Through this type of public popularity, the finance minister and his cabinet were likely to target corruption in cryptocurrency and online sales.

Another example of how the finance minister is working to improve the Indian economy comes with trends that started in 2016. Indian finance was dealt a catastrophic blow when the government authorized the withdrawal of all Rs 500 and Rs 1000  notes from circulation to remove the chance for “black money”. Though this move by the government left a giant gaping hole available for Bitcoin exchanges to take up the rest of the underground currency market, and with the threat of cryptocurrency set to take over this black money exchange within the market, many banks began to freeze accounts that were tied to Bitcoin exchanges across the country as part of a government order.

The problems, therefore, India is trying to solve, are global problems for all governments and cryptocurrencies and this is the first major government to give time and space in their annual budget speech. It is not a shutdown, but, how to work with this technology in a safe way for Governments.

Anyone who thought Bitcoin’s future relied on it being a money launderer’s paradise, never understood what actually is the reason so many people believe in Cryptocurrencies.

For brokers offering Contracts for Differences on Cryptocurrencies such as 24option – the interest of trading CFDs on Crypto remain unabated. This is hardly surprising given that good or bad news, it’s all in the headlines each week.

What would the Adoption of Cryptocurrencies Represent in India?

Mass adoption of cryptocurrency without regulation in India would most certainly lead to an extensive amount of corruption as well as a huge degree of civil unrest within the economy. If there is a mass adoption of cryptocurrencies online this would represent a shadow economy within India that would act parallel to the current economic structure as well as remove a massive amount of financial resources from an economy that has had recent problems maintaining their treasury.

Allowing the ongoing trade and adoption of cryptocurrency in India would represent a chance for corruption to skyrocket ensuring that every bribe given would be completely untraceable. Anyone involved with corruption could enjoy continuing to take advantage of the class divide and create complete lawlessness without the chance of state repercussion because of the total lack of regulation with the payment system.

According to a 2017 study performed by transparency international, 7/10 people that were accessing public services throughout India were forced to pay some type of bribe. By making items like these bribes completely anonymous, it could drive the cost of obtaining even basic services almost impossible for many people.

Why there is a Need for a Crackdown on Corruption?

Almost every basic service within India generally requires some type of small bribe. Whether you are grabbing a train ticket, securing a court date or even getting a license test. It’s estimated that 60% of people in India did not actually complete any type of test to acquire their drivers’ license but rather paid a bribe to get it instead.

Petty corruption is rampant even in basic services like healthcare, education and the judicial system. Many estimate that with 11 basic services in the government and a fairly standard corruption rate of 60%, the economy misses out on nearly 4.9 billion US dollars annually as a result of people having to pay small, petty cash bribes for fake tolls, healthcare, and the most basic of services.

Major companies can actually pay just as a larger contribution in siphoning money away from the economic prosperity of the country. The telecom industry was able to siphon away close to $30 billion in a 2G spectrum scam whereby licenses were granted to mobile phone companies through fake legislation the government was not even tied to. With some of the largest service providers even falling victim to corruption and manipulating markets across the country, having the ability to do this anonymously would only lead to greater problems within the country.

Why is it the Right Time to Introduce Legislation on Cryptocurrencies?

The signs of corruption and the mass adoption of cryptocurrency across India are beginning to be part of India’s financial system. Bitcoin was beginning to be used in increasingly astounding numbers for transfers across international borders as well as within the country itself.

Over the past few months, the spike of users has gone up to match the incredible gains that Bitcoin made with its value. With prices at an all-time high at the end of 2017, there were still a rapid number of new users brought in every month. The demand for bitcoin prices actually put the trading stocks in many Indian exchanges consistently higher than the prices that were found in the United States and worldwide. For the most part, this was due to the excessive demand as well as the capital control system.

The capital control system in India made it quite difficult for Indian citizens to purchase Bitcoins while they were outside of the country or operating a website outside of the country. Until an Indian Bitcoin platform known as Unocoin came along there was not a dedicated exchange that could begin to lower prices and as a result, many Indian users were purchasing their Bitcoins at premium rates.

Nevertheless, even with the extensive gap in Bitcoin prices, users and signups for this exchange were dating at around 10,000 users each month in the early part of 2017 and close to 8000 users per month towards the end of December. New stats have not emerged from Unocoin as to whether or not membership rates have dropped off since the announcement on February 1. With so many new users and with citizens within India starting to buy up plenty of Bitcoins as the market rose, legislation is needed desperately to ensure that the ongoing exchange does not begin and feed corruption further.

Why Is All of This Good?

In the short term, headlines may say India is anti-Crypto. Actually, the speech by Jaitley makes clear they are very much pro blockchain and by tackling the global problems raised by Crypto – India is the best test bed for reasons of size – it will accelerate a regulated mass market for Crypto.

If India as a test-bed can solve Cryptos many issues, which the overoptimistic overlook and India can and will, then Crypto will boom – and it will.

You can see why India is the most important market for blockchain and then, a regulated Cryptocurrency market – because it seeks to solve on a massive scale of all of the crypto problems. Nothing Arun Jaitley said is against that. And if like me, you’ve ever spoken to him – you know he and his government are pro-technology.

Alpesh is a hedge fund manager and Author of Trading Online (Financial Times). He is a partner to 24option who offer CFD trading on Cryptocurrencies.

The content of this article constitutes Marketing Communication and does not qualify as Investment Advice or Investment Research. This article is produced by Alpesh Patel. Any views or opinions presented in this article are solely those of the author and do not necessarily represent those of 24option. The article is of a general nature and does not take into consideration individual readers’ personal circumstances, investment experience, and current financial situation. 24option accepts no liability for the content of this article, or for the consequences of any actions taken on the basis of the information provided.

Alpesh is the founder of FCA regulated asset manager and hedge fund, Praefinium Partners with funds domiciled out of Luxembourg and Singapore and Author of Trading Online (Financial Times). He is a partner to 24option who offer CFD trading on Cryptocurrencies. He is a former presenter on Bloomberg TV and columnist of the weekly ‘Diary of an Internet Trader’ in the Financial Times. As a Visiting Fellow in Business at Corpus Christi College Oxford University he lectured on behavioral finance. He is a Dealmaker for the UK Government working with global fintech and blockchain companies. He won the award in the Financial Times for top FTSE 100 forecaster. View all posts by Alpesh Patel 24option Partner