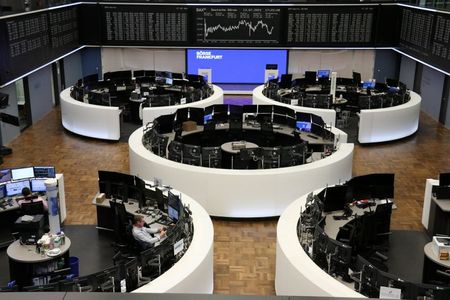 The pan-European STOXX 600 index fell 0.3% after hitting a record high in the previous session.

Travel & leisure slid 0.8%, with TUI shedding 2.9% on reports that the world’s largest holiday company had cancelled more holidays until August.

UK’s FTSE 100 dropped 0.4% on a stronger pound after data showed British inflation jumped to 2.5% in June, further above the Bank of England’s target and hitting its highest since August 2018.

“The creeping UK headline inflation rate is likely to add to the sense of unease pervading the financial markets about the impact higher prices will have on economies around the world,” said Susannah Streeter, a senior investment and markets analyst at Hargreaves Lansdown.

“Although much of the increases are related to the unusually low level of prices last year due to the pandemic effect, it appears genuine price inflation is also occurring.”

All eyes now will be on Federal Reserve Chairman Jerome Powell’s congressional testimony starting later in the day.

European Central Bank policymakers have stressed in recent weeks that they will not remove support measures prematurely as the economic recovery is still underway.

Along with euro zone bond yields, the bloc’s banks rallied after sharp falls in the previous session.

German fashion house Hugo Boss jumped 5.1% after it forecast its revenue to grow by 30% to 35% this year.

German airline Lufthansa slipped 0.6% after it said passenger numbers were currently around 40% of pre-pandemic levels and it was aiming to reach 60%-70% by the end of the year.

(Reporting by Sruthi Shankar in Bengaluru; editing by Uttaresh.V and Subhranshu Sahu)