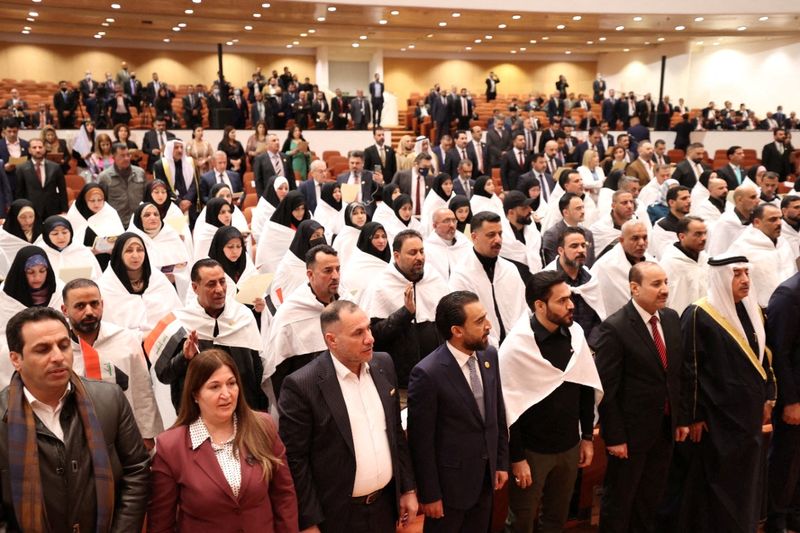 By Ahmed Rasheed and Haider Khadim

The first session of parliament since the Oct. 10 election, however, was disrupted earlier in the day as competing political Shi’ite blocs each claimed to hold a parliamentary majority and as the acting speaker, Mahmoud al-Mashahadani, suddenly fell ill and was taken to hospital, forcing the session to be briefly adjourned.

When the session resumed Halbousi was elected for a second term as speaker, defeating Mashahadani, a former speaker of the first parliament set in 2006. Halbousi won with 200 votes, according to a statement from 329-seat parliament.

Mashahadani was in hospital under surveillance for fatigue but was discharged after a couple of hours, parliament’s office said in a statement.

Parliament now has 30 days from the first session to elect the country’s new president, who will then ask the largest bloc in parliament to form a government.

There were heated debates and shouting among lawmakers over which party had the most number of seats.

Iran-backed Shi’ite political coalition Fatah and the State of Law coalition, which is led by former Prime Minister Nuri al-Maliki, submitted a document to the acting speaker requesting that their coalition be the largest bloc in parliament.

Lawmakers from Shi’ite cleric Moqtada al-Sadr’s party, which came first in the October election, strongly objected to the request, defending their position as the largest bloc.

“The debate between Shi’ite parties over which bloc is the largest in parliament has disrupted the session and forced a brief delay,” said Jamal Kojar, a Kurdish lawmaker.

Sadr is a populist who has positioned himself as a staunch opponent of both Iran and the United States. His bloc, already the biggest in parliament before the October election, will expand to 73 seats from 54. Its main rival for years, the Fatah bloc of factions linked to pro-Tehran militia, saw its parliamentary representation collapse in the election to just 17 seats from 48.

However, some lawmakers could yet switch factions and parliament’s presidency will ultimately decide which is the biggest faction.

Hakim al-Zamili, who ran for Sadr’s party, was elected as Halbousi’s first deputy speaker. Shakhwan Abdulla from the Kurdistan Democratic Party (KDP), was voted for as a second deputy.

Iran-backed Shi’ite Muslim parties rejected the elections of the parliament speaker and deputies on Sunday, pledging to resort to the supreme court to contest the legality of the appointments.

“What happened today inside the parliament is illegal and will have dire consequences on the state level,” said Fatah lawmaker Humam al-Tamimi.

Under Iraq’s governing system in place since the post-Saddam Hussein constitution was adopted in 2005, the prime minister is a member of the Shi’ite majority, the speaker is a Sunni and the largely ceremonial role of president is held by a Kurd.

(This story corrects typo in byline)