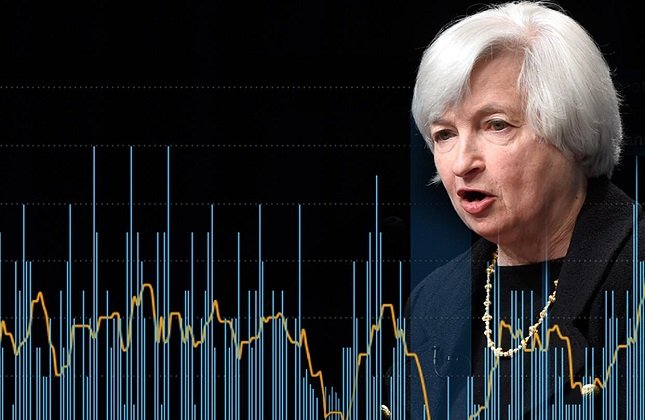 Federal Reserve Chairwoman Janet Yellen will give a speech on inflation in Cleveland today at an economic conference. The CB Consumer Confidence reading will also come from the States. Wall Street produced moderate selling on Monday. Gold has been volatile.

Investor Nervousness Remains, Will Yellen Talk About a Lack of Inflation?

Wall Street put in a day of moderate selling on Monday. Important data will come from the U.S today via the Conference Board’s Consumer Sentiment report, but investors will also perk up their ears for any surprises from Federal Reserve Chairwoman Janet Yellen who is scheduled to speak about inflation today. Core Durable Goods Orders will come from the U.S tomorrow. Yesterday’s selling on the major equity exchanges shows some nervousness remains among U.S investors.

Asian equities opened on shaky ground this morning, but the Hang Seng and Shanghai Shenzhen composites have turned in slight gains. The Nikkei has seen a slight decline, but this must be taken into context with its massive rally the past month. The Yen has been stronger but remains near the 112.00 juncture against the U.S Dollar. A Services Producer Price Index from Japan this morning proved better than expectations.

European equities have opened with cautious selling. The Footsie has been under the most pressure and has lost over 1 and a half percent the past month. The Pound has remained weaker against the U.S Dollar this morning and is below the 1.35 mark. German Import Prices figures came in fractionally below their estimate today.

Gold has seen fast trading early. After putting in strong gains, the precious metal has been pushed back the past few hours. Gold has important support in sight and should be watched carefully the remainder of the day for potential volatility.

Fed Chairwoman Janet Yellen may grab the spotlight this afternoon with her speech which will start 16:45 GMT.