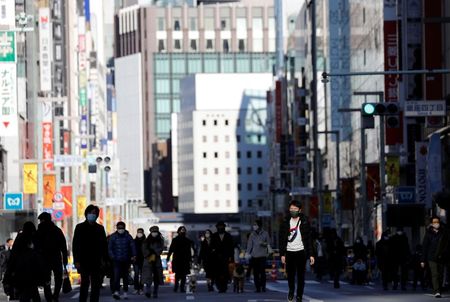 The government will also unveil plans to promote green and digital investment by drawing in private demand, as part of efforts to revitalise the world’s third largest economy, according to the draft of this year’s blueprint.

“The government will seek to promptly return Japan’s economy to pre-pandemic levels with a determination to never again push the country back to deflation,” the draft showed.

“Japan will strive to improve its fiscal health,” along with efforts to revive the economy by taking flexible action “without hesitation,” the draft added.

The draft blueprint, which serves as a backbone for this year’s economic policymaking, will be submitted to its top economic council on Wednesday for deliberation by ministers, academics and business executives.

A final version of the blueprint is likely to be approved by the cabinet on June 18, taking into account the views of ruling coalition lawmakers.

Japan has for years set a timeframe for bringing the primary budget, excluding new bond sales and debt servicing costs, back to a surplus in its annual fiscal blueprint.

The timeframe was taken out of last year’s fiscal blueprint as huge spending to deal with the pandemic’s pain added to the country’s massive public debt.

This year’s blueprint is likely to mention the primary balance target in some form, though the exact wording is still under discussion including whether to mention the timeframe, two government officials with direct knowledge of the matter said.

The government has been under political pressure to water down the already stretched fiscal target this year as the cost to combat the pandemic accumulates, casting further doubt on Tokyo’s resolve to fix Japan’s tattered finances.