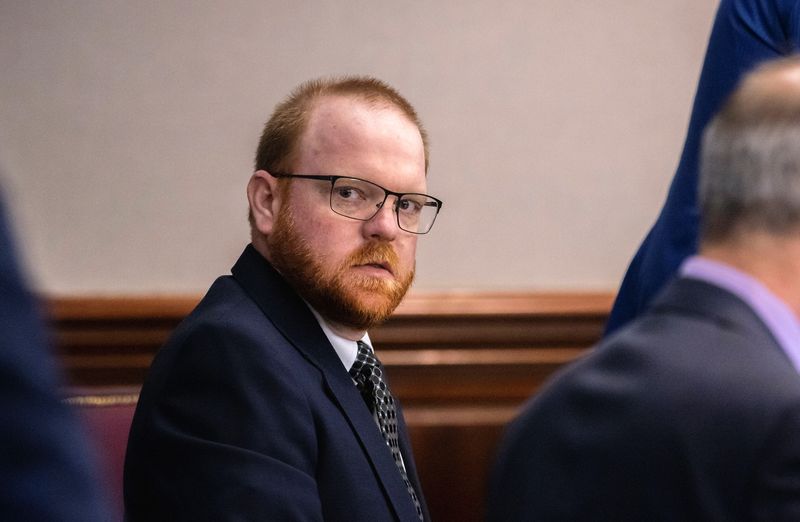 By Jonathan Allen and Rich McKay

(Reuters) -Pressed by a prosecutor about inconsistencies in his testimony, Travis McMichael said at his murder trial on Thursday that he misspoke to police in the hours after fatally shooting Ahmaud Arbery, a Black man who ran by McMichael’s home in Georgia.

McMichael, one of three white men on trial for Arbery’s death, had told the jury a day earlier that Arbery was grabbing his shotgun at the end of a five-minute chase, so he fired in self defense. On Thursday, he conceded that he told police that day that he could not say for sure whether Arbery actually grabbed it.

The defense teams rested their cases on Thursday, and jurors were told to return on Monday morning for closing arguments.

McMichael said the accounts he gave of the shooting to police initially were “choppy” because he was nervous and under stress. He at times misspoke to police, he said, or “had it wrong” in his statements made soon after the shooting on Feb. 23, 2020, in Satilla Shores in coastal Georgia.

“I just killed a man,” he said. “I had blood on me still. It was the most traumatic event of my life.”

Prosecutors and relatives say Arbery was an avid runner jogging in a neighborhood a couple of miles from his home.

Outside the Glynn County Superior Court building, hundreds of Black pastors assembled from around the country to offer prayers for Arbery and his family.

The rally was organized after Kevin Gough, a lawyer for co-defendant William “Roddie” Bryan, unsuccessfully asked for a ban on Black pastors coming into the courtroom after Rev. Jesse Jackson, Rev. Al Sharpton and other civil rights activists sat with Arbery’s parents in the courtroom’s public gallery.

McMichael told jurors on Wednesday that while he and his father and co-defendant, Gregory McMichael, were chasing Arbery in their pickup truck, Arbery “turned and ran” when the younger McMichael told him the police were on their way.

In cross-examination by prosecutor Linda Dunikoski on Thursday, McMichael agreed that he did not explicitly mention such a moment in a police interview the afternoon of the shooting, nor include it in a written statement he made that day. He later conceded that his father had not called the police while they were pursuing Arbery.

“You’re telling this jury you’re all confused and you can’t get your facts straight when you’re telling the police why you shot and killed a man?” Dunikoski asked.

“I’ve never been through a situation like that,” he said.

The younger McMichael said he tried to be calm when calling out to Arbery during the chase and used polite language including “please.”

Dunikoski contrasted this with the threatening language McMichael’s father used, according to his accounts to police.

Quoting from one of the police interviews, Dunikoski asked the younger McMichael if he heard his father shout at Arbery: “‘Stop or I’ll blow your fucking head off?'”

McMichael said he did not recall hearing that.

The two McMichaels presented a joint defense. Their neighbor Bryan, who jumped in his own pickup truck and joined the chase after seeing it go past his driveway, did not call any witnesses.

McMichael left the stand after more than six hours of testimony over two days. His lawyers have argued that McMichael’s neighborhood was on edge over some recent thefts, and called some Satilla Shores residents to testify who said they did not know the McMichaels but had seen thefts discussed in a community Facebook group.

(Reporting by Rich McKay in Atlanta and Jonathan Allen in New York; Additional reporting by Octavio Jones in Brunswick; Editing by Steve Orlofsky and Cynthia Osterman)