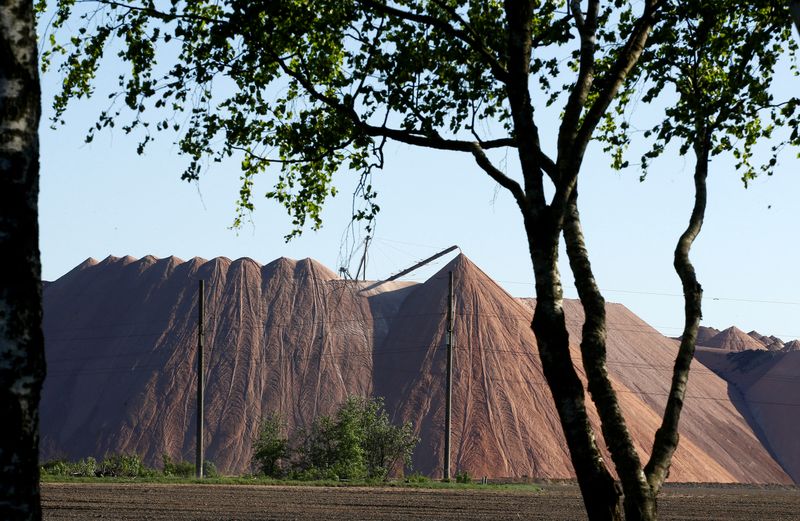 VILNIUS (Reuters) -The head of Lithuania’s state-run railways, Mantas Bartuska, agreed on Tuesday to step down to “de-escalate” public outcry over the transport of potash from sanctions-hit Belarus, but the company said it could not stop facilitating it for now.

The issue has shaken public opinion in the Baltic state, one of Europe’s most vocal critics of human rights abuses in Belarus, forcing Prime Minister Ingrida Simonyte to consider resigning, although she announced on Tuesday she would stay in her post.

Landlocked Belarus uses Lithuania’s Klaipeda port to export potash from state-owned producer Belaruskali, one of the world’s largest producers of the crop nutrient, which is Minsk’s main foreign currency earner.

“The board and the CEO agreed that in order to de-escalate the situation and to minimize the risks to the company’s reputation … the best decision is that the CEO leaves after a transitional period,” Lithuanian Railways (LTG) Chairman Kestutis Sliuzas told a news conference.

LTG added in a statement that it lacked sufficient legal grounds to stop the transportation of potash.

Belaruskali was sanctioned by the United States in August, one year after a crackdown following a disputed presidential election which President Alexander Lukashenko said he won.

A ban on sales of potash took effect on Dec. 8 after a four-month wind-down period, but potash continues to be transported via Lithuania.

Outgoing CEO Bartuska said last week that LTG expects to continue transporting Belaruskali’s fertiliser despite the sanctions, because they only apply to U.S.-connected entities.

He said LTG has a contract with Belaruskali which expires at the end of 2023 and that Belaruskali had paid in advance for railway services throughout December and a part of January.

The company attempted to return the advance last week, immediately after Bartuska’s meeting with Simonyte, but Belaruskali’s bank did not accept the transfer, Sliuzas said.

Opposition parties have said the continued transport of potash has damaged Lithuania’s reputation among Western allies.

But Simonyte said in a statement after a late-evening meeting with Foreign Affairs Minister Gabrielius Landsbergis and Transport Minister Marius Skuodis to consider her resignation and offers of the two ministers to step down that political instability was also a concern.

LTG’s Sliuzas said Bartuska was in contact with both ministers as he worked out whether to keep transporting the potash.

“Given … the challenges posed by COVID and migration, it would be irresponsible to risk the uncertainty that would result from even an attempt to form a new majority or change the composition of the government significantly,” she said.

Lithuania, alongside Poland, has seen a steep rise in the flow of people from Middle East and Africa seeking to cross its borders from Belarus this year, in a migration crisis the European Union says is being orchestrated by Lukashenko.

Simonyte said Vilnius would look for a “path that poses the least risk to the state before refusing cargo” from Belarus, while maintaining its support for sanctions pressure.

LTG’s Sliuzas said the company might be able to stop potash transport if the Lithuanian government changes legislation to allow it to break its contract or when a U.S. Treasury’s wind-down period on transactions involving BPC expires on April 1.

Without legal grounds, LTG could face international arbitration and fines that could bankrupt it, Bartuska said last week.