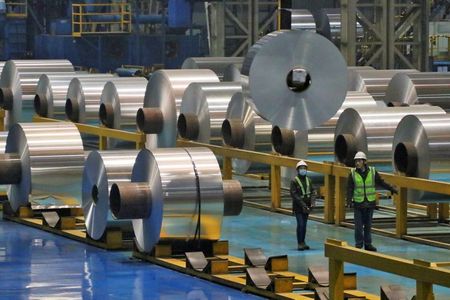 Aluminium prices have been supported by production curbs in Chinese smelting regions often aimed at easing the strain on the power grid.

The government in southern China’s Guangxi region, an aluminium and alumina production hub, called on Monday for tougher controls on energy consumption, according to a statement issued after a teleconference it gave, sparking fears of more output cuts.

“The impact of power and production restrictions in Yunnan is still expanding,” Huatai Futures said in a report, adding the addition of other production areas to the list was not ruled out.

Yunnan is an aluminium hub and has seen some smelters forced to cut production due to power curbs this year.

The China Nonferrous Metals Industry Association held a meeting of top aluminium smelters on Monday to address what it described as an “irrational surge” in aluminium prices.

* The LME cash aluminium contract was trading at a premium of $25.75 a tonne to the three-month contract, its biggest since July 2018, indicating tightening nearby supplies.

* One party controls 50%-80% of available aluminium stocks and short-term futures on the LME, exchange data showed.

* Average alumina prices in China provided by SMM rose to 2,802 yuan a tonne on Monday, the highest since June 2019. Guangxi is China’s third-biggest alumina-producing region with output of 925,500 tonnes in July, according to the National Bureau of Statistics.