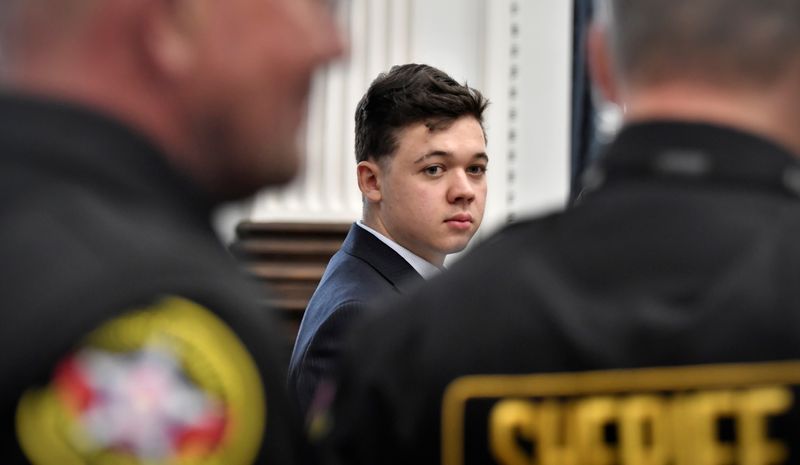 KENOSHA, Wis. (Reuters) -A witness in the murder trial of U.S. teenager Kyle Rittenhouse said on Friday that one of the two protesters killed that night was acting aggressively and repeatedly challenged a group of armed men to shoot him, but that he did not consider the man a threat.

Rittenhouse, 18, has been charged in the deaths of Joseph Rosenbaum, 36, and Anthony Huber, 26, and in the wounding of Gaige Grosskreutz, now 27, during a chaotic night on Aug. 25, 2020, in Kenosha, Wisconsin, during protests following the police shooting and wounding of a Black man.

He has pleaded not guilty and says he acted in self-defense.

Jason Lackowski, a former Marine, was with Rittenhouse on the night of the shootings. Prosecutors sought to use Lackowski’s testimony to show that he, while being similarly armed to Rittenhouse, did not see Rosenbaum as a threat.

Prior to the shootings, Lackowski said Rosenbaum had taunted him and other armed men close by to shoot him and also “false-stepped” in their direction – a motion of stepping toward someone and then quickly stepping back.

“After he did that a few times I turned my back and ignored him,” Lackowski said, answering “no” to a question from Kenosha County Assistant District Attorney Thomas Binger about whether he considered the unarmed Rosenbaum a threat.

Lackowski said he was armed with an AR-15 semi-automatic rifle, similar to the weapon held by Rittenhouse. He said he, along with others, had come to Kenosha to protect a used car lot after rioting and arson in the city in previous nights.

Under cross-examination, Lackowski acknowledged that, unlike Rittenhouse, he was not alone when he came into contact with Rosenbaum and that his calculation of the potential threat could have changed if Rosenbaum had threatened his life.

Lackowski also said Rosenbaum was using “the N-word” while asking people to shoot him, utterances that prompted other protesters to react negatively toward him. The protests had been sparked by the police shooting of Jacob Blake, a Black man, on Aug. 23, 2020. Blake was left paralyzed from the waist down.

Corey Chirafisi, an attorney for Rittenhouse, pointed out the context in which Rosenbaum allegedly used the racial slur.

“He’s saying this at a protest for an African-American man who was shot by police.”

Rosenbaum’s fiancee testified that he had been diagnosed with bipolar disorder, which prosecutors could use to argue that he was the aggressor in the encounter and to question his mental stability.

Kariann Swart, Rosenbaum’s fiancee, testified that Rosenbaum was not armed when he went out the night of the shootings. She became emotional, dabbing her eyes with a tissue, when she was shown a picture of them together and she talked about her visit to the crime scene the following day where she touched the ground where he fell, wetting her hand with his blood.

Swart, who had been with Rosenbaum for about one year prior to his death, said she believed he had taken his medications, which included gabapentin for bipolar disorder, on the day of the shootings. She also testified that he could not fill his prescriptions because the pharmacy close to where they were staying was boarded up due to the chaos in Kenosha.

A series of police officers were called to testify. One who processed Rittenhouse’s rifle said he was never asked to swab the barrel of the gun for DNA and did not do so. The barrel is a focal point in the trial because Rittenhouse’s lawyers want to establish that Rosenbaum lunged for it before he was shot.