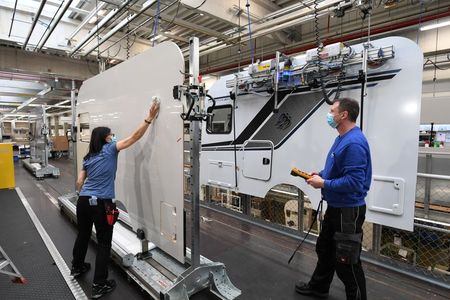 IHS Markit’s flash Purchasing Managers’ Index (PMI) of activity in the manufacturing sector shot up to 66.6, the highest reading since the survey started in April 1996. That compared with 60.7 in February and beat a Reuters poll forecast for a reading of 60.8.

The surveys were conducted before Chancellor Angela Merkel’s government and leaders of Germany’s 16 states decided this week to reimpose strict measures shutting down most businesses until April 18 to try to break a third wave of COVID-19.

The data also pointed to a revival in the services sector, which had suffered under COVID-19 lockdown measures imposed in November and which were eased early this month.

The flash PMI for the services sector rose to a seven-month high of 50.8, up from 45.7 in February.

As a result, the preliminary composite PMI, which tracks the manufacturing and services sectors that together account for more than two-thirds of the German economy, rose to a 37-month high of 56.8 from 51.1 the previous month.

“The flash PMI pointed to a notable upturn in German business activity in March, with the data therefore hinting at the prospect of a better-than-expected economic performance in the first quarter,” said Phil Smith, associate director at survey compiler IHS Markit.

“The result owed to a combination of survey record growth in manufacturing output and a better performance from services, where some firms benefited from the slight easing of lockdown restrictions.”

But the picture was not all rosy, he added, pointing to supply chain pressures in manufacturing which were pushing up input costs at the fastest rate in nearly 25 years.

“Businesses remain highly optimistic about the outlook over the coming year, with many pinning their hopes on progress in the vaccine rollout,” said Smith.

“However, with the ’emergency brake’ restrictions coming into effect in April to stem a third wave of infections, the immediate outlook looks less promising.”