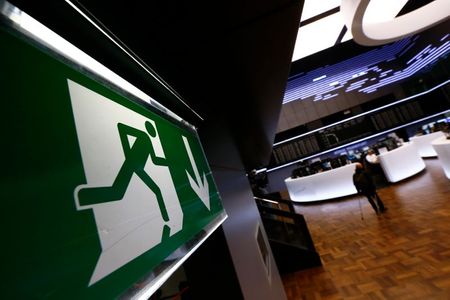 A look at the day ahead from Saikat Chatterjee.

European and U.S. stock futures fluctuated between gains and losses after U.S. stocks posted their biggest two-day rise since July.

While a large part of those gains can be attributed to easing concerns about Evergrande contagion, Thursday’s spike in yields in the global $60 trillion plus government debt markets raised the prospects of tighter monetary policy sooner than later.

Long-term U.S. Treasury yields have surged the most in 18 months as traders brought forward expectations for the first Fed rate hike to the end of 2022 and the Bank of England opened the door to a 2021 rate increase — sparking the biggest jump in two-year UK gilt yields since March 2015.

Yield curves from Australia to Germany bear steepened in response and the dollar sprung to the top of its 2021 trading range. While it remains to be seen whether the rise in yields can be sustained, some signs of weakness can be detected in the “buy the dip” trade from investors.

Value stocks, a beneficiary of higher yields, outperformed growth ones on Thursday while FAANG stocks have underperformed broader markets so far this month. And if investors are hoping quiet weekend, think again.

Sunday’s election in powerhouse European economy Germany will provide food for thought as Chancellor Angela Merkel steps down after 16 years in charge.

Her successor will play a new role in shaping domestic and broader EU policy and have to steer Germany’s economy through a still uncertain post-COVID environment.

Thursday’s flash PMIs for September pointed to a sharp slowdown in economic activity from the previous month from rising energy prices and difficulty in sourcing parts and materials, headwinds that are unlikely to abate in the coming days.