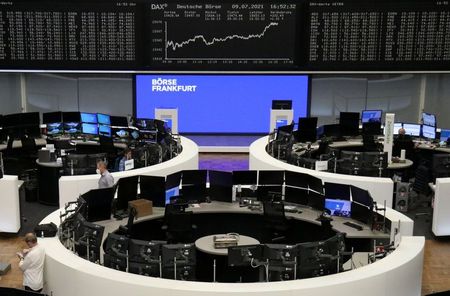 While U.S. 10-year Treasury yields have bounced back 10 basis points from the 1.25% floor hit last week, there’s still a lot of uncertainty on the direction of travel.

The pandemic is obviously the biggest unknown moving forward with the Delta variant causing a surge in cases around the world.

From Sydney, which reported another record daily rise in COVID-19 cases, to London where the British government’s plans to lift restrictions comes just as a new wave of infections hits, it’s clearly not what markets had in minds.

In that light, China cutting the amount of cash that banks must hold as reserves to boost liquidity and back its economic recovery is a sign that the global economy is not out of the wood yet.

The move has at least temporarily lifted spirits in Asia with MSCI’s broadest index of Asia-Pacific shares outside Japan gained 0.7% after shedding 2.3% last week.

Crude futures are also under pressure despite talks among key producers to raise output in coming months stalling.

In Europe and on Wall Street, stocks futures are mixed ahead of an earnings season that is about to kick off with record expectations.

While profits for Europe Inc are expected to have soared over 100% in the second quarter, any setback could bite hard with markets already pricing stellar earnings.

Key developments that should provide more direction to markets on Monday:

– ECB to change policy guidance at next meeting, Lagarde says