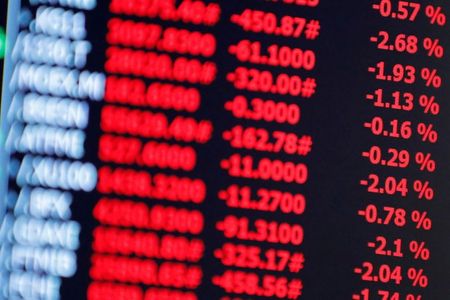 A look at the day ahead from Julien Ponthus.

Earnings for the S&P 500 and Europe’s STOXX 600 are currently expected to rise 32% and 46% respectively and, so far, companies which have already reported results have exceeded expectations overall.

Goldman Sachs’s 66% surge in profit on Friday, courtesy of a big wave of M&A and IPOs, came after the four largest U.S. consumer banks also shone.

But now as Europe waits on blue chips such as ASML Holding and Unilever to enter the arena and for Netflix to kick off the reporting for the ‘FAANG’ group, the mood may be souring again.

Philips on Monday lowered its outlook as parts shortages bite and over on Wall Street, there are now more downward than upward revisions, suggesting Q3 enthusiasm may have reached its peak.

Data showing that China’s economy hit its slowest pace in a year due to power shortages, supply chain bottlenecks and property market wobbles, has dampened the mood and MSCI’s broadest index of Asia-Pacific shares outside Japan is losing 0.4%.

Futures for European and U.S. equities are also in negative territory while Brent crude oil prices are trading well above $85 a barrel after hitting their highest price since October 2018.

Elsewhere bitcoin is above $62,000 with the first American bitcoin futures ETF expected to begin trading this week amid global inflation worries.

Prices are rising too quickly for policymakers’ tastes and Bank of England Governor Andrew Bailey on Sunday warned investors that he and his colleagues “will have to act”.

Investors are speculating that the BoE might become the first of the world’s biggest central banks to raise rates, later this year or early in 2022.

Central bank action will be closely watched this week with a meeting in Turkey, Hungary expected to nudge up its benchmark on Tuesday and Russia’s central bank to follow on Friday.

Key developments that should provide more direction to markets on Monday: