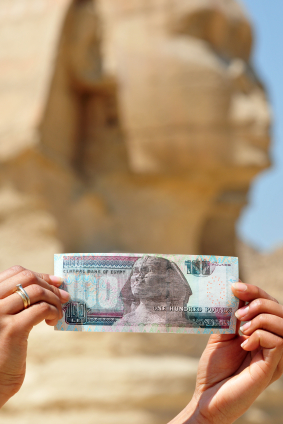 Crude oil eased slightly this morning as traders took advantage of the sharp climb to book profits and also the strong US dollar is weighing on the commodity, but nothing seems to stand in the path of the worries traders are feeling over events in Egypt and their effects on regional stability, where Syria remains at civil war and Turkey continues to see the protests in the street grow. WTI oil prices rose as high as $102.18, the highest they’ve been in over a year, before settling at $101.24 a barrel, 1.7% higher.

While oil production from Egypt is almost non-existent, the country controls the Suez Canal and pipeline, which move about 4 million barrels of oil per day. Plus, the country is one of the largest and most powerful in the Middle East and North Africa — home to about a third of the world’s oil production. With Egypt on the verge of a meltdown, fears of supply disruptions will likely drive oil prices higher.

Protesters in Egypt have been demanding the country’s democratically elected Islamist president, Mohamed Morsi, step down, saying he has not governed the country in an inclusive manor. On Wednesday evening, the Egyptian military said Morsi was no longer president. At this time it is understood that President Morsi is under military house detention at “The Club”.

Mori is not in any danger and the military says this is not a coup and they are not seeking power, but responding to the inactions of the President and the demands of the people. The military has placed the Constitutional Judge in office and he is expected to appoint a technocratic government to lead Egypt representing all peoples and factions equally leaving government out of politics until new elections can be held. The deposing of Egyptian President Mohammed Morsi by the military Wednesday likely freezes any chance for an International Monetary Fund bailout for the ailing economy until an internationally-recognized government is installed.

In recent months, a handful of neighboring countries such as Qatar have been keeping Egypt’s economy afloat by loaning the country’s central bank cash. That has bought Morsi government time to delay implementing the politically-sensitive measures the IMF has sought as a precondition before it gives Cairo a $4.8 billion credit line. In particular, the IMF had said that Egypt must raise taxes and begin phasing out fuel subsidies.