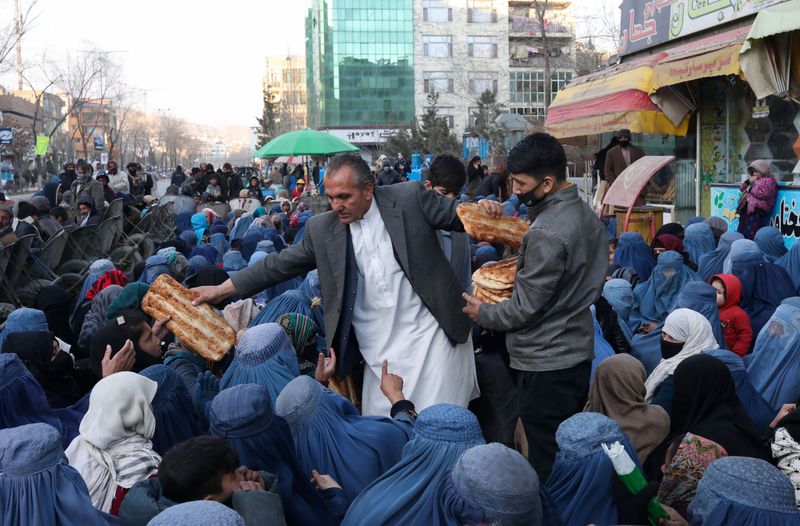 WASHINGTON (Reuters) – The number of people in Afghanistan who cannot afford food and other essentials has doubled since the Taliban takeover of the country in August 2021 as unemployment rises and wages fall, a World Bank survey showed on Tuesday.

The Afghanistan Welfare Survey, conducted by phone and covering the October-December 2021 period, found that 70% of respondents said their households were unable to cover basic food and non-food needs, up from 35% in May 2021.

The share of Afghan households switching to lower-quality or less expensive food rose to 85% from 56% in the July-August 2021 period, it found.

Nearly half of households also reported a decline in the number of meals consumed each day, up from around a quarter in July-August 2021.

The World Bank attributed the sharp increase in poverty to overall economic conditions rather than to “specific actions introduced by the interim administration”, citing in particular a decline in public sector jobs.

Donors cut financial aid constituting more than 70% of government expenditures and about $9 billion in Afghan central bank assets were frozen. Many Taliban leaders remain under U.S. and U.N. sanctions.

The United Nations has previously warned that more than half of Afghanistan’s 39 million people face starvation.

The World Bank study found about a fifth of household heads were looking for work in the October-December 2021 period, up from 8% during the same period of 2019, largely due to a decline in jobs in the army, police and other security services.

Despite Western concerns that the hardline Islamist Taliban would roll back women’s rights, the survey said that nationwide, school attendance among both boys and girls aged 6-18 had risen in October-December 2021 compared to the same period of 2019.

The share of households sending boys to school increased to 73% from 63%, while those sending girls rose to 54% from 44%.

Under their previous rule from 1996 to 2001, the Taliban barred women and girls from education. They say they have since changed.