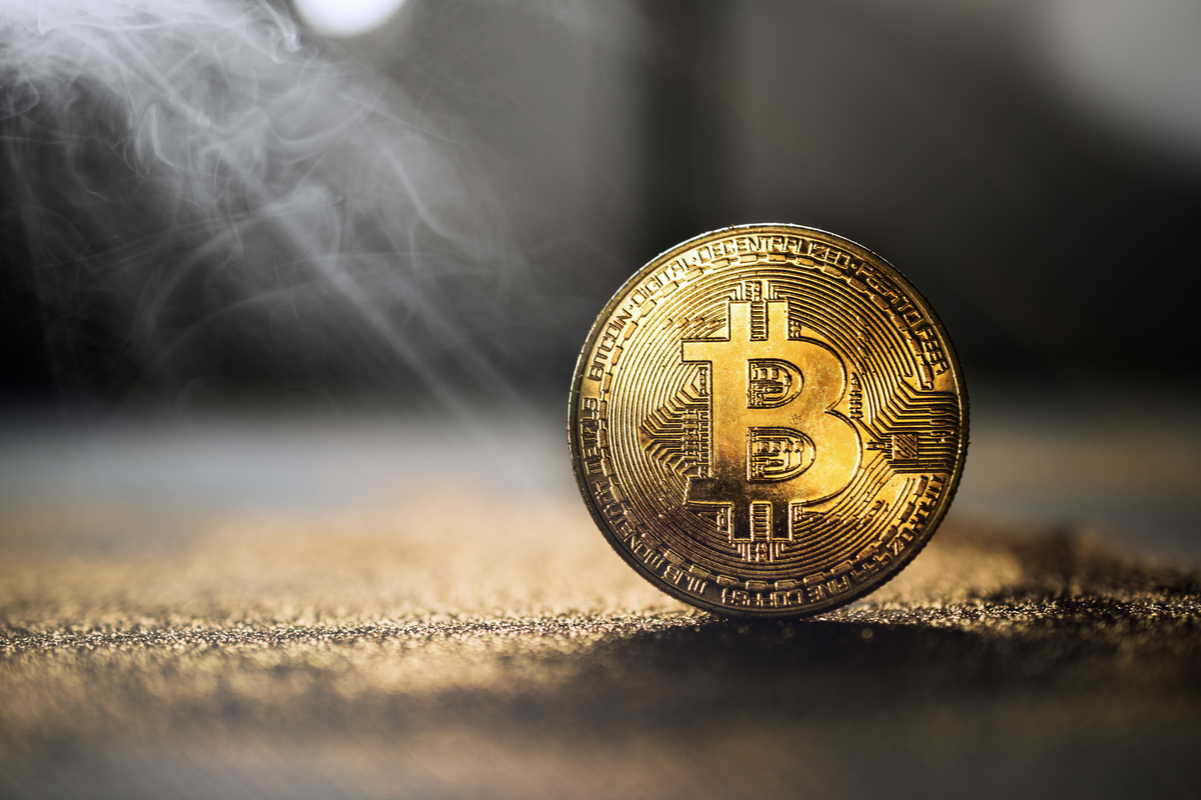 Cryptocurrency prices spiked in tandem with upside in US stocks and downside in US bond yields in the immediate reaction to Wednesday’s Fed policy announcement, despite the bank living up to the hype and delivering a widely expected 75 bps rate hike, the largest hike in 28 years. Having lifted the target interest rate range to 1.50-1.75%, the Fed’s new dot-plot signaled it expected rates to hit 3.4% by the end of the year and go as high as 3.8% in 2023 before rates could be reduced back to 3.4% again in 2024.

In other words, the Fed is signaling its intent to take interest rates well into so-called “restrictive” territory by the end of the year, meaning Fed policy should weigh heavily on US growth by the end of the year and in 2023. Very hawkish stuff, most agreed, leaving analysts perplexed as to why crypto and risk assets saw an initial rally on the announcement. For reference, total cryptocurrency market cap recovered as much as $100 billion from its pre-Fed announcement levels to as high as $960 billion on Wednesday.

Perhaps the Fed’s espoused view in its latest economic forecasts that robust economic growth in the US is set to continue this year and next (which some called wishful thinking) pushed back against recently growing US recession fears, offering some support to risk assets. But the bounce in sentiment didn’t last long, with total cryptocurrency market cap now having fallen back below $900 billion once again and down about 6.0% already on Thursday.

“Hopes of an extended breakout from Wednesday’s rebound have subsided,” said FX Empire’s head of crypto market analysis Bob Mason, adding that “risk aversion has spread from the European and US equity markets to cryptos”. As to why risk appetite has once again soured on Thursday, Mason explained that “reality has bitten as free money gets taken off the table”, with the market “struggling with a marked shift in central bank monetary policy”.

Indeed, it’s not just the Fed to have hiked interest rates this week. Within the last 24 hours, the Brazilian central bank has lifted rates by 50 bps and the Swiss National Bank, for a long-time seen as a stalwart of dovish central bank policy, on Thursday surprised markets with a 50 bps rate hike (taking rates to -0.25% from –0.75%). Meanwhile, the Bank of England also just lifted interest rates by 25 bps to 1.25%, with a few rate-setters having favored a bigger 50 bps move.

Looking ahead to the rest of Thursday’s session, a dump of US Housing, US jobless claims and regional US manufacturing survey data will provide some insight into the health of various sectors of the US economy (i.e. the housing and labor market plus industrial sector). Investors will be keen to assess whether the data supports the Fed’s still fairly optimistic view on the economy.

Any build-up of recession fears risks sending crypto to fresh weekly lows, which for total crypto market cap could mean a push lower towards $800 billion. FX Empire’s Bob Mason warns that “cryptos may stand ahead of equities in terms of being dropped first to preserve capital” and that “a bitcoin fall to sub-$20,000 would really test investor resilience through the afternoon session”.

For reference, BTC/USD was last trading back close to the $21,000 level on Thursday, down over 6.0% on the day and down about 8.0% versus its post-Fed peaks. That gives the world’s largest cryptocurrency a market cap of around $400 billion. Elsewhere, Ethereum was last back to trading in the low $1,100s, down over 10% from its post-Fed highs in the mid-$1,200s, giving it a market cap of around $135 billion.

The world’s second-largest cryptocurrency is currently eyeing a test of weekly (and annual) lows just above $1,000, a break below which could open the door to a run towards the next area of support (the May 2018 highs) in the mid-$800s. In terms of the major altcoins, BNB was last down about 7.0%, SOL about 9.0% and ADA and XRP about 8.0% on Thursday, with each having significantly pared post-Fed gains in tandem with the major cryptocurrencies.

According to the widely followed Director of Global Macro Strategy at Fidelity Investments Jurrien Timmer, one metric to assess the valuation of Bitcoin suggests the cryptocurrency may currently be “cheaper” than it looks. Bitcoin’s price/network ratio has fallen back to its 2017 and 2013 levels, Timmer stated, even though its price has only fallen back to late 2020 levels.

Swift cites LookIntoBitcoin’s RHODL Ratio, which assesses and takes a ratio between the wallet activity of one week and one-two year Bitcoin holders. The RHODL Ratio is yet to hit a so-called “green zone” that LookIntoBitcoin says suggests capitulation has peaked and that price bottoming is imminent.

In further bitcoin-related commentary, crypto billionaire and Galaxy Digital founder and CEO Mike Novogratz said on Wednesday that he expects Bitcoin to lead a market recovery once the Fed pauses/reverses rate hikes. “Bitcoin will lead the markets back out of this Fed hike,” Novogratz stated, adding that “the moment the Fed flinches, the moment (Fed Chair Jerome) Powell pauses because the economy’s really starting to roll over, you’re going to see Bitcoin explode north”.

Novogratz cited anecdotal evidence as supporting this conviction. “Lots of guys I talk to are seeing the next time they’re going to get engaged is when they start sensing Fed’s going to pause,” he noted. Meanwhile, the Galaxy Digital CEO argued that Bitcoin could start its recovery even if equities continue to decline. “If you look at the 1970s, gold led the market back not stocks”, he pointed out, alluding to how the same could happen for Bitcoin in the 2020s.

Following an announcement earlier in the week that it would be laying off nearly 20% of its staff, amounting to around 1,000 employees, Coinbase has announced that it will be letting go of 8% of its Indian workforce, various crypto media outlets reported on Thursday. Amid the ongoing downturn in crypto prices (referred to as the “crypto winter” within the industry), other crypto exchanges are also suffering.

But it’s not all bad for crypto exchanges. Kraken announced on Wednesday that it would continue to hire for over 500 positions, despite the crypto winter. “We have not adjusted our hiring plan, and we do not intend to make any layoffs,” the crypto exchange said in a statement on Wednesday. “We have over 500 roles to fill during the remainder of the year and believe bear markets are fantastic at weeding out the applicants chasing hype from the true believers in our mission”.

Global technology consulting giant Capgemini on Tuesday released its annual World Wealth Report, which revealed that, according to a survey of 2,973 high-net-worth individuals, some 71% have already invested in digital assets. Of these individuals, 54% had a net worth of between $1 million and $30 million, while 46% had a net worth of above $30 million. More than nine in ten of the high-net-worth individuals aged below 40 years old held digital asset investments.

Capgemini’s survey, which suggests the rich have already embraced crypto to a large extent, comes after a Bank of America survey released on Monday showed that in a survey of 1,000 existing and potential crypto users, 91% plan to invest in crypto within the next six months. The BoA survey revealed that the average transaction size was about $25 with PayPal and Coinbase the most frequent platforms used, indicating it’s not just the super-rich getting into crypto.

Bitcoin’s adoption by the global population could hit 10% as soon as 2030, a new report by Blockware last week claimed.

There should be stronger regulatory oversight of crypto lending platforms operating in the US in light of the recent freezing of withdrawals from crypto trading/lending platform Celsius, former US Commodity Futures Trading Commission (CFTC) Chair Timothy Massad said in an interview with CoinDesk earlier this week. Meanwhile, Chair of the US House of Representatives Ways and Means Committee Richard Neal asked the Government Accountability Office (GAO) to weigh in on the move by some major US pension plan providers (like Fidelity Investments) to allow savers to add cryptocurrencies into their retirement portfolios. The GAO is a legislative watchdog that is tasked with publishing policy analysis and recommendations.

Turning now to Europe, European Central Bank executive board member Fabio Panetta said on Wednesday that if the central bank issues its own digital currency, it should cap the number of tokens to between one and one and a half trillion. “Our preliminary analyses indicate that… (this) would avoid negative effects for the financial system and monetary policy,” said Panetta. “This amount would be comparable with the current holdings of banknotes in circulation,” he added. The idea of the proposed limit is to disincentivize HODLing, as some investors do with crypto assets.

Meanwhile, over in Russia, a bill that would ban the use of crypto as a form of payment in the country has passed its first reading in the State Duma, Russia’s lower house of parliament.