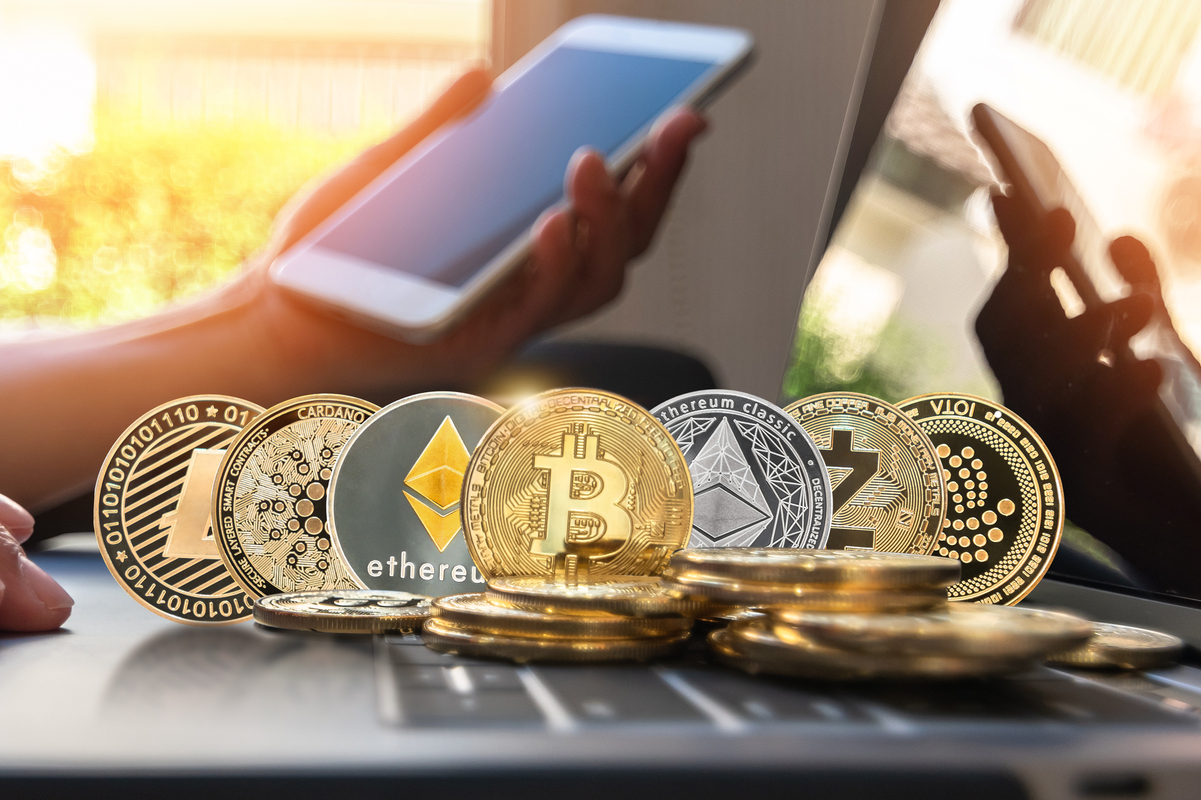 Stabilization is being seen in global equity, bond and currency markets in wake of recent risk-off moves/bond yield upside. Investors keeping their powder dry as they wait to hear from the European Central Bank, for the release of May US Retail Sales data and then the Fed’s policy announcement later in the evening. The Fed is expected to raise interest rates by 75 bps, after data last Friday showed price pressures unexpectedly building once again in the US in May.

Despite the more consolidative macro feel, cryptocurrency markets remain under heavy selling pressure. Total cryptocurrency market capitalization has now slid to just above $880 billion, down a further near 4.0% on the day, taking its losses in the last six days to over $330 billion or just shy of 27.5%.

Traders are warnings that further downside might well be instore for crypto if 1) the ECB’s ad-hoc meeting results in a hawkish intra-day change in policy, 2) US Retail Sales data signals rising US recession risk and 3) the Fed surprises markets with a more hawkish than expected rate outlook. Bitcoin was last trading just above $21,000, down a further nearly 5.0% on the day and taking its losses in the past six days to just under 30%, during which time it has fallen to fresh annual lows from above $30,000 and shed $170 billion in market cap.

Alternative.me’s Bitcoin Fear & Greed Index is currently sitting just above record lows at 7. It has only been lower in August of 2019 and there is increased chatter amongst crypto market participants of HODLer capitulation. According to on-chain analytics firm Glassnode, the number of Bitcoin whales just hit a 22-month low of just 1,734.

Turning to major altcoins, Ethereum was last trading lower by more than 10% on Wednesday and recently printed fresh lows since January 2021 in the mid-$1,000s. ETH/USD has lost 40% of its value in the last six days, with the world’s second-largest cryptocurrency having shed over $85 billion in market cap during that time. A break below $1,000 would open the door to a run towards the next area of support (the May 2018 highs) in the low $800s.

Binance’s BNB, meanwhile, was last down by around 6% in the last 24 hours according to CoinMarketCap, with BNB/USD briefly dipping $200 for the first time since February 2021. Cardano’s ADA was last down around 4% over the same time period, and trading just under $0.50, while Ripples XRP continues to trade close to $0.30 and Solana’s SOL a tad lower on the day just under $30 per token.

Speaking of Celsius Network, withdrawals from the platform have now been frozen for more than 48 hours. Reportedly the firm has hired lawyers who specialize in business restructuring to help it navigate its current financial difficulties. The firm’s CEL token, which offers holders the benefit of improved lending/borrowing rates on the platform, has been all ove the place in recent days. In what traders called a short-squeeze, CEL/USD surged by as much as 800% on Tuesday, from under $0.30 to intra-day highs above $2.50, but has since fall back 80% to trade just above the $0.50 mark.

Regarding Three Arrows Capital, the Dubai-based crypto hedge fund is rumored to be facing insolvency, various crypto media outlets have reported this week, having incurred seen positions worth at least $400 million liquidated. Much of this has likely happened in the last few days. According to crypto derivative analytics website CoinGlass, crypto future position liquidations have spiked this week. Total liquidations rose to at least three-month highs on Monday above $1.1 billion.

Elsewhere, one of the last remaining major algorithmic stablecoins, the Tron blockchain’s Decentralised US dollar (USDD) continues to fall further from its 1:1 peg to the US dollar. USDD maintains its peg with a mint-burn mechanism tied to Tron’s native crypto token TRX, much how ill-fated TerraUST (USTC) did with the Terra blockchain’s native LUNA token. As a result, many have been predicting a crash. In an apparent and somewhat strange reference to USTs demise back in May, Tron founder Justin Sun tweeted “Deploying more capital – steady lads”, exactly the same tweet that Terra founder Do Kwon put out in the initial stages of UST’s depeg from 1:1 with the US dollar.

Despite USDD’s troubles, with the stablecoin currently trading around $0.969, and further sharp losses in TRX/USD, which is trading around $0.05 and down over 30% this week, Sun said that Tron would be increasing its ecosystem workforce by a further 50%. That very much cuts against the grain, with most other firms in the crypto industry downsizing their workforces.

The latest company to announce layoffs was US crypto exchange giant Coinbase, which announced plans on Tuesday to lay off around 18% of its workforce, amounting to 1,000 employees. Back in May, it froze new hires. In a note to employees published on Tuesday, the company’s CEO Brian Armstrong said that “we appear to be entering a recession after a 10+ year economic boom” and that the company had grown too quickly during the crypto bull market in 2021.

JP Morgan issued a bearish note on the company’s stock, cutting its rating from overweight to neutral and slashing its price target to $68 from $171. It will be challenging for Coinbase to generate near-term profit amid the deepening crypto bear market and following a recent ramp-up in investments, the US investment banking giant noted.

Back to the stablecoin landscape; Singapore-based Tether, the issuer of USDT, has been under scrutiny once again amid allegations that its commercial paper portfolio is 85% backed by Chinese or Asia paper. These rumors are “completely false and likely spread to induce further panic in order to generate additional profits from an already stressed market,” Tether said in an announcement on Wednesday. The stablecoin issuer also denied rumours that it had loaned capital to struggling crypto hedge fund three Arrows Capital.

USDT was last trading about 0.2% below its 1:1 peg to the US dollar in the $0.998 area, having at one point dipped as low as $0.995 on Wednesday. That might not be as bad as it seems given US-based Circle Internet Financial’s US dollar stablecoin USDC, seen as a safer bet by many given the company’s greater levels of transparency about the assets it holds to back USDC, is also trading about 0.2% below its 1:1 peg against the dollar. The two stablecoins currently have a market cap of around $70 billion and $54 billion respectively.

US Securiturities and Exchange Commission (SEC) Chair Gary Gensler, speaking at the Wall Street Journal’s CFO Network Summit on Tuesday, gave wide-ranging remarks on issues related to crypto. He warned that the broad bipartisan crypto regulation bill recently unveiled by US Senators Cynthia Lummis and Kirsten Gillibrand could inadvertently “undermine” market protections for investors. Gensler added that the SEC wants to protect its role of overseeing how companies can raise money from the general public. Gensler warned that the majority of tokens currently in the crypto market fall under the purview of SEC regulation and should therefore be required to offer the same disclosures as traditional securities.

Moreover, the SEC Chair observed that many crypto companies are already engaging in behaviors that are typically overseen by his agency, including, for example, offering yield for staking. Separately, Gensler also issued a warning to would-be crypto investors to avoid crypto lending platforms offering returns that seem “too good to be true”. “We’ve seen again that lending platforms… (are) operating a little like banks,” he noted, adding that “they’re saying: Give us your crypto. We’ll give you a big return”. New York’s Attorney General Letitia James also issued a warning to investors about crypto this week, cautioning them that investors have lost hundreds of billions in recent weeks.

Separately, reports broke on Tuesday that the SEC is investigating crypto exchanges over insider trading. The agency has reportedly sent letters to several exchanges inquiring as to their lack of insider trading safeguards.

Meanwhile, in further news related to crypto regulation in the US, the House of Representatives is preparing to hear testimony on digital asset regulation sometime later this month, the Block reported on Wednesday. The House Agriculture Committee’s subcommittee on commodity exchanges, energy, and credit is getting ready to conduct a hearing on the “Future of Digital Assets Regulation” that is currently scheduled for 23 June.

Outside of the US, South Korea is reportedly mulling new laws for blockchain platforms that would better regulate crypto and protect investors. Meanwhile, Brazil’s Federal Deputy Paulo Martins has introduced a bill to legalize crypto payments in the country. Elsewhere, France’s Olympic committee is recommending that the country adopt blockchain ticketing technology for the Paris 2024 games.

Meanwhile, the EU’s Commissioner for Financial Services Mairead McGuinness on Tuesday urged EU lawmakers to find a political compromise to speed the passage of the EU’s proposed Markets in Crypto Assets (MiCA) regulatory framework. MiCA is currently stuck in the final stage of the EU legislative process. McGuinness said that, if passed, MiCA could facilitate the implementation of fresh sanctions against Russia.