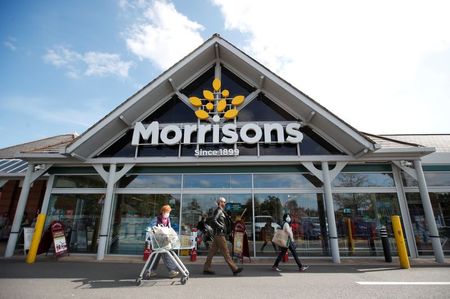 Morrisons, Britain’s fourth-largest grocer by sales behind market leader Tesco, Sainsbury’s and Asda, said on Saturday that it had rejected a proposed 5.52 billion pounds ($7.62 billion) cash offer from CD&R.

Shares in Morrisons were up 56.7 pence to 235.2 pence at 1059 GMT, as some analysts said they expected CD&R to assess investor reaction before deciding on its next move.

Under British takeover rules CD&R, which has former Tesco boss Terry Leahy as a senior adviser, has until July 17 to announce a firm intention to make an offer or walk away.

Shares in rivals Tesco, Sainsbury’s and Marks & Spencer rose as much as 3.2%, 5.7% and 4.1% respectively on hopes that the whole sector could be in play, analysts said, adding that some short sellers were also closing out positions.

Silchester and Columbia Threadneedle, Morrisons’ two largest investors, which Refinitiv data showed having stakes of 15% and 7.4% respectively, both declined to comment.

In addition to the possibility of other private equity players entering the fray there has long been speculation that online shopping giant Amazon, which has a partnership agreement with Morrisons, could emerge as a possible bidder.

Morrisons, unique among British supermarket groups in making over half of the fresh food it sells, trades from about 500 stores and has 118,000 staff, making it one of the country’s biggest private sector employers.

Britain’s opposition Labour Party warned on Sunday that a private equity acquisition of Morrisons could put jobs at risk.

Industry executives and some sector analysts believe the stock market has failed to recognise the inherent value in Britain’s listed supermarket groups.

They argue that if equity markets do not value them appropriately, acquirers will.

“Investors want a very binary story about knuckling down, keeping capex to a minimum and just becoming a cash machine,” one senior supermarket executive told Reuters.

Zuber and Mohsin Issa in February joined forces with private equity firm TDR Capital to buy a majority stake in Asda from Walmart in a deal valuing the group at 6.8 billion pounds.

Shares in both Morrisons and Tesco closed below their pre-coronavirus pandemic levels on Friday.

While sales have soared at all British supermarket groups during the coronavirus crisis, their profits have fallen sharply because of the huge extra costs incurred.