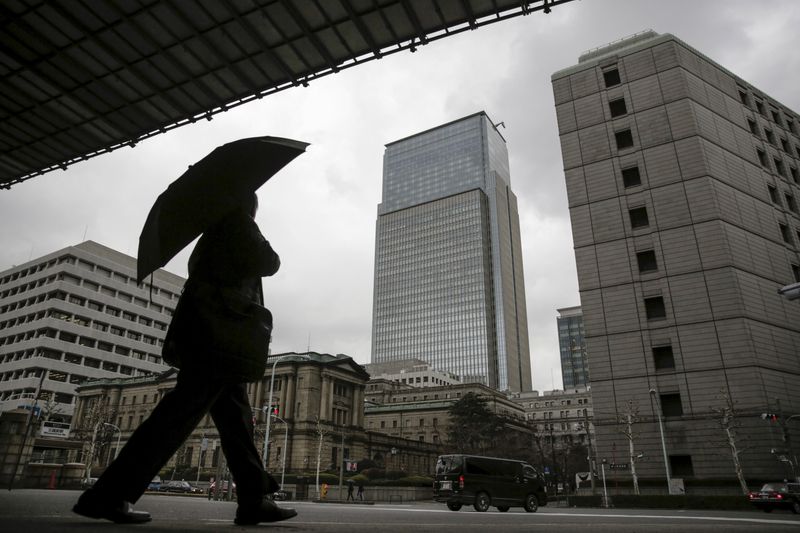 TOKYO (Reuters) – The Bank of Japan on Thursday strengthened its commitment to keep interest rates ultra-low by vowing to buy unlimited amounts of bonds daily to defend its yield target, triggering a fresh sell-off in the yen and sending government bonds rallying.

Reinforcing its resolve to support a fragile economy even as sharp rises in raw material costs push up inflation, the BOJ maintained its ultra-loose monetary policy and a pledge to keep interest rates at “present or lower levels.”

It also said it would buy unlimited amounts of 10-year government bonds to defend an implicit 0.25% cap around its zero yield target every market day, instead of on an ad-hoc basis.

The BOJ’s commitment to its zero-rate programme puts it at odds with other major economies that are shifting toward tighter monetary policy to combat surging prices, although inflation in Japan is expected to creep up towards the central bank’s 2% target.

“The key announcement is the commitment to conducting fixed-rate operations every day,” said Bart Wakabayashi, co-branch manager at State Street Bank in Tokyo.

“I think they are trying to make the point here that we’re ready to act at any second. They’ve quadrupled down on their commitment to this.”

The BOJ’s strengthened commitment to keep policy accommodative drove the yen well below the psychological threshold of 130 to the dollar for the first time since 2002.

Yields on the benchmark 10-year Japanese government bonds slipped to a more than three-week low of 0.215%.

Kuroda said there was no change to his view that a weak yen benefits Japan’s economy, a sign further falls in the currency likely won’t prompt the BOJ to tweak its ultra-easy policy.

But he warned that excess market volatility could hurt the economy by making it difficult for firms to set business plans.

An official of Japan’s finance ministry, which decides whether to conduct currency intervention, told reporters Tokyo will take “appropriate” action as needed and warned that recent sharp yen moves were “extremely worrying”.

As widely expected, the BOJ left unchanged its -0.1% target for short-term interest rates and a pledge to guide the 10-year bond yield around 0%.

In fresh quarterly forecasts, the central bank projected core consumer inflation to hit 1.9% in the current fiscal year before moderating to 1.1% in fiscal 2023 and 2024 – a sign it sees current cost-push price rises as transitory.

In a nod to rising inflationary pressure, however, the BOJ said wage and price increases were expected to broaden as the economy continues to recover.

“The rise in underlying inflation is likely to further push up medium- and long-term inflation expectations,” the central bank said in its quarterly outlook report.

But Kuroda said he did not expect conditions to fall in place for the BOJ to seek an exit from its loose policy in the foreseeable future.

Core consumer inflation, which hit 0.8% in March, is set to accelerate to around 2% from April, though the rise will be driven largely by rising fuel costs and the dissipating effect of past cellphone fee cuts – rather than from higher wages, or underlying demand.

Some analysts say the markets could challenge the BOJ’s easy policy commitment.

“There’s no sign at all that prices are stably going to rise to 2% so everyone is wondering whether it’s really good to keep going as it is,” said Takeshi Minami, chief economist at Norinchukin Research Institute in Tokyo.

“Markets could attack (the BOJ’s unlimited bond buying),” he said.