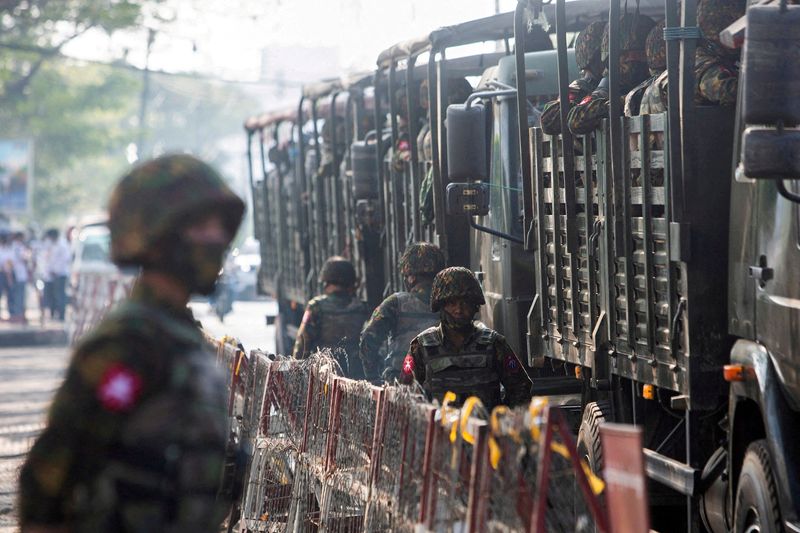 The group Fortify Rights and Yale Law School’s Schell Center said after a joint investigation the junta leadership deployed snipers to kill protesters to instil fear, while soldiers were instructed to commit crimes and given a “fieldcraft” manual that contained no guidance on rules of war.

The investigators, in a 193-page report released on Thursday, analysed leaked documents and 128 testimonies from various sources including survivors, medical workers, witnesses and former military and police personnel, about the turmoil in Myanmar in the six months after the coup on Feb. 1 last year.

They said they had obtained and verified internal memos to police ordering them to arbitrarily arrest protesters, activists and members of the ousted ruling party, and cited testimony from victims of torture and other abuses.

“All individuals responsible for these crimes should be sanctioned and prosecuted,” said Matthew Smith, head of Fortify Rights and co-author of the report, which recommends members of the United Nations push for a global arms embargo on Myanmar and international legal action against its generals.

A spokesman for Myanmar’s military did not immediately respond to calls seeking comment on the report’s findings.

Fortify Rights is an independent non-profit organisation based in Southeast Asia and founded in 2013, funded by donations from Europe, Asia and the United States, including from private foundations. It has carried out extensive work on Myanmar.

The Schell Center was set up at Yale Law School in 1989 for law students and graduates to specialise in international human rights and to assist human rights organisations.

The investigation will add to global pressure on the military to halt its crackdown on opponents and the use of air strikes and shelling in civilian areas.

It comes a week after a U.N. report concluded that the Myanmar army was responsible for war crimes and crimes against humanity. The junta has yet to respond but has previously dismissed accusations of atrocities as foreign interference based on falsehoods.

The report, called “Nowhere is Safe”, also identified 61 military and police commanders who the researchers said should be investigated for crimes against humanity, helped by information from security sources about the chain of command.

Among those were six active-duty army personnel, including a colonel and two majors.

The researchers said they established locations of more than 1,000 military units at the time of the crackdown, which they said could help prosecutors geo-locate perpetrators of crimes.

Junta chief Min Aung Hlaing’s new “special command” in the capital Naypyitaw was run by four of his top generals, it said, with no others authorised to take decisions on operations by troops deployed in towns and cities.

“Without a concerted effort to stop ongoing atrocities and to hold the junta accountable for the crimes it has committed to date, the junta will undoubtedly continue to persecute its opponents, murder civilians, and devastate the social, health, and economic wellbeing of Myanmar,” said Roger Polack, a visiting fellow at the Schell Center and co-author of the report.