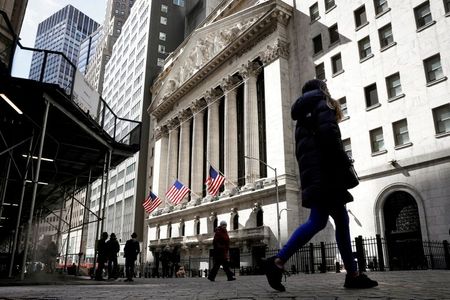 The energy sector rose, reversing most of the losses suffered during the first three days of the week. Thursday’s performance was fueled by U.S. crude prices jumping 2% on a sharp decline in U.S. inventories and a weaker dollar.

The technology index slipped into negative territory, as some of the industry’s largest companies saw their recent upward momentum stall.

Amazon.com Inc, Microsoft Corp, Facebook Inc and Google-owner Alphabet Inc were all under water. A notable exception was Netflix Inc, which hit an all-time high intraday.

U.S. stocks have regularly hit record highs over the past few weeks as a solid corporate earnings season and hopes of continued central bank support underpinned confidence as data showed the country’s post-pandemic economic growth was beginning to slow.

Data on Thursday showed the number of Americans filing new claims for jobless benefits fell last week, although the focus will be on the Labor Department’s monthly jobs report on Friday to set the stage for the Fed’s policy meeting later this month.

“You have to see very wide beats or misses in this data to really change people’s minds,” said Greg Boutle, U.S. head of equity and derivative strategy at BNP Paribas.

“Investors are either in this renormalization camp that thinks inflation will not happen, or they believe there will be some persistence to inflation. Really, it will be a collection of beats or misses that will move the needle for investors and the Fed, rather than a single data point.”

Wells Fargo rose after three straight sessions of losses. The lender had been weighed by a report it could face further regulatory sanctions over the pace of compensating victims of a years-long sales practice scandal.

Contracting services company Quanta Services Inc jumped to a record high after saying it would buy privately held Blattner Holding Company in a deal valued at about $2.7 billion.