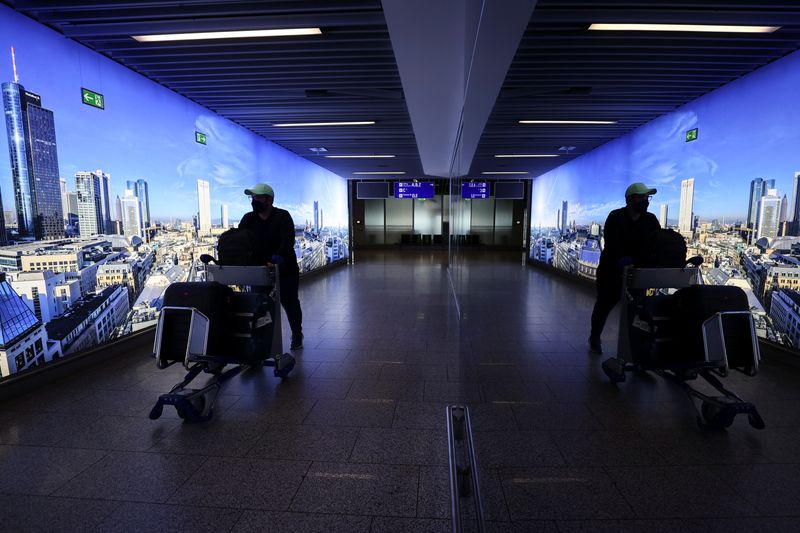 FRANKFURT (Reuters) -Airlines cancelled hundreds of flights to and from German airports on Monday as security workers went on strike amid a wage dispute.

Security workers staged a full-day walkout at six airports including Duesseldorf, Cologne/Bonn and Berlin on Monday, and one-day strikes have also been called for other airports on Tuesday including Frankfurt and Hamburg.

The strike comes as airlines are reeling from the impact of the war in Ukraine, with soaring fuel prices and airspace closures, after two years of low travel demand due to the coronavirus pandemic.

The walkout by security staff has resulted in a high three-digit number of flight cancellations, German airports association ADV said.

Some 160 of them were at Duesseldorf airport, accounting for more than half of the planned 290 departures and arrivals, the airport said.

At Cologne/Bonn, 94 out of 136 flights were called off, and Berlin airport’s website also showed many cancelled flights.

Frankfurt airport operator Fraport said only transit passengers would be able to get to their flights on Tuesday, when the airport was originally due to handle around 770 departures and arrivals, serving close to 80,000 passengers.

Lufthansa, Germany’s flagship carrier, which has a hub at Frankfurt, said it was cancelling 48 flights on Tuesday.

Labour union Verdi is demanding that employers raise the wages of airport security staff by at least 1 euro an hour for the next 12 months and that staff in different parts of Germany earn the same.

BDLS, the association of aviation safety companies, said all of Verdi’s demands combined amounted to increases of up to 40% and were “utopian”.

A next round of wage talks between BDLS and Verdi has been scheduled for Wednesday and Thursday, the two parties said.