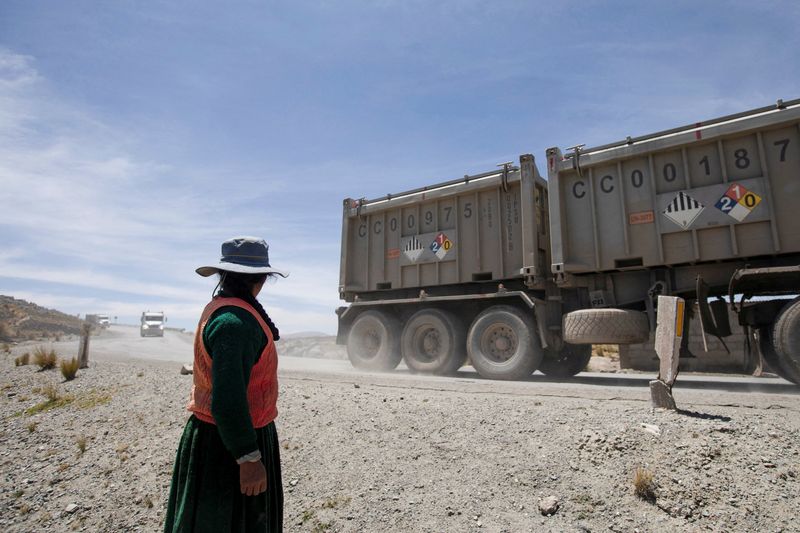 PISACCASA, Peru (Reuters) – Gabino Leon is angry, and he is not alone.

The farmer in Peru’s southern Apurimac region watches each day as hundreds of trucks carrying copper roar past his adobe home, kicking up dust on a potholed dirt road that has become a lightning rod for protests hitting the world’s no. 2 producer of the metal.

Leon’s rage – echoed in hundreds of small hamlets around the South American nation, Reuters reporting shows – is because, he says, he sees little benefit from that mineral wealth on his doorstep and blames mining for damaging his livelihood as a subsistence farmer.

“All the wealth of Apurimac goes before our eyes,” Leon told Reuters at his home, some 20 kilometers (12 miles) from MMG’s Las Bambas mine, which started production in 2016 and supplies some 2% of the world’s copper. “But it leaves us with nothing.”

Communities around Peru have long been skeptical of the benefits of mining to their lives. But they are growing bolder about their demands under socialist President Pedro Castillo, who came to power in July pledging to shake up the mining sector and redistribute copper profits more fairly.

Reuters traveled hundreds of miles along the mining corridor, through the mineral-rich regions of Apurimac and Cuzco, as well as a separate mining highway in Ancash. Interviews with over 60 people from local communities revealed the main complaints: pollution affecting water sources, a lack of infrastructure or jobs, and dust from trucks locals blamed for killing crops and animals.

Castillo has ordered local officials to go easy on protesters and has not imposed martial law to maintain order, a tool often used by presidents in the past.

Mining protests have increased since Castillo came to office, and most take place in Andean localities where he received overwhelming support, according to a report by the nonprofit Observatory of Mining Conflicts set to be published on Tuesday. In the province of Cotabambas, home to Leon and Las Bambas, Castillo won 91% support.

Las Bambas has said it will suspend operations if a new blockade of the mining corridor is not resolved.

Last month, London-listed silver miner Hochschild saw its shares plummet over 50% after a Peruvian government official said two of its mines would not be granted extensions after the local community complained they had polluted the water. Hochschild said in a filing that it “categorically rejects” the accusations. Executives and the government have since said they are in dialogue.

But the tensions have put Peru on edge. They raise questions over the future of investment in a country where the economy is dependent on mining income, even as global copper prices soar near record highs.

“We have at this moment some ten areas where mining operations are being blocked or affected, the most emblematic case being the mining corridor of Las Bambas,” said Raul Jacob, the president of the national mining industry group.

“It just can’t be that every other week the mining corridor is blocked.”

Las Bambas has paid 4.9 billion soles ($1.21 billion) in taxes since 2016, it said in a presentation in September. Its operations represent some three quarters of the economy of Apurimac, a region of 406,000 people.

Yet, Apurimac’s poverty rate has barely fallen since the mine started operating – it was 35% in 2020, with small gains being undone by the pandemic. The figure is above-average for Peru.

“We share the worries,” Carlos Castro, Las Bambas head of corporate affairs, told Reuters. The problem, he said, was local governments that did not spend the mining tax income effectively. The mine was offering training to local governments on how to manage public spending, said Castro.

Apurimac governor Baltazar Lantaron said in an interview with local media this year that the issue was complex, and that sometimes funds are budgeted but not transferred to the region in time. Apurimac has spent $88 million of the $130 million budget it has from mining income this year, according to finance ministry data as of Dec. 10.

Meanwhile, Castillo, who on the campaign trail slammed mining firms for “pillaging” the country’s wealth, is pushing Congress to raise taxes on mining.

“We are doing a reform at the beginning of the (commodities) cycle,” said Jose de Echave, an economist advising the government on tax reform, adding the challenge was how to “intervene in social conflicts before blockades occur.”

“We lost eight to nine years in which we could have captured higher taxes,” he said, a reference to the last time Peru enacted a mining reform, amid the commodities boom.

De Echave and Victor Villa, who provides legal advice to protesters in Chumbivilcas province blocking the mining corridor, both said the government was also taking a less confrontational approach to protests.

“I think (Las Bambas) was hoping for a martial law declaration, but that dream has faded away,” said Villa.

A complaint shared by dozens of farmers that Reuters spoke to is the dust. It can be felt viscerally in the air near the mining corridor, which for long stretches is an unpaved dirt road. Many in the Apurimac and Cuzco regions it traverses live as smallholder farmers and say the dust harms their produce and their health.

“(The dust) pollutes, it kills our animals, it decreases the productivity of our crops,” said Veronica Montes, as 53 trucks passed her adobe home.

Claudio Caceres, Las Bambas general counsel, said the issue with dust was “a reality” that the firm was trying to mitigate.

“The dust exists,” he said. “But from a technical point of view, according to our studies, it does not harm people’s health.”

The mining firm has backed the national government’s plan to pave sections of the road and potentially build a railway to carry the metal to the coast.

Elena Alvarez said the mine had polluted a river which she used for drinking water for herself and her farm animals, affecting her health, her cattle, and her finances.

“Before the mine, I used to produce milk and make money, now we’ve been led to financial ruin,” said Alvarez, who has no mains electricity or plumbing.

Antapaccay chief executive Carlos Cotera denied the mine had polluted the local water.

“Mineral content in the water, which is a real problem, is related to the natural presence of these minerals in the soil, and not due to the mining operation,” he said in a statement to Reuters.

He added there were issues around mining profits benefiting communities. “We think that the current distribution system has not been able to reduce social divides.”

The government takes an active role to mediate conflicts between companies and local communities, but truces can be tough to negotiate and brief.

On Monday, protesters from Chumbivilcas province rejected MMG’s latest offer on a deal to avoid a shutdown of Las Bambas, sparking counter-protests from mine workers worried about their jobs.

The community had reached a deal for more transport jobs at Las Bambas in October, but blocked the road again because they say the number of jobs on offer is too low.

A three-hour drive along the mining corridor, Leon, the farmer, heard about the protests and thought it might be time for his Cotabambas province to take a similar approach.

“We want what they have and we can get it,” he said.