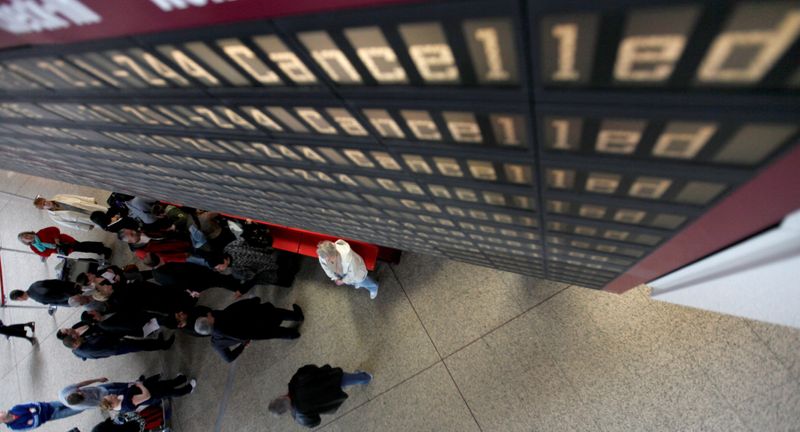 WARSAW (Reuters) -Poland could drastically cut back on flights to and from Warsaw from May 1 if a dispute with air traffic controllers over pay and conditions is not resolved, according to legislation published before negotiations were set to resume on Tuesday.

Almost 90 percent of air traffic controllers in Warsaw chose to quit rather than accept new working regulations, which they say threaten safety. Some have already left and the notice period for the remaining 136 ends on April 30.

This will leave Warsaw’s two main airports with only 26 controllers between them and likely lead to mass cancellations of flights to and from Warsaw, but authorities said flights passing through its airspace should not be cancelled.

The government announced late on Monday in the official gazette that from May 1, the Chopin and Modlin international airports would only be operational from 0930 to 1700 local time due to a lack of air traffic controllers. The legislation gave a list of flight destinations that would be prioritised.

Airlines affected would include LOT Polish Airlines, Wizz Air and Lufthansa, which all operate out of Chopin airport, and Ryanair, which flies out of Modlin.

Ryanair said on Tuesday it had complained to the European Commission about the legislation because it believes the list of prioritised destinations unfairly favours LOT.

Among proposals seen as unacceptable by the union are a cut in air traffic controllers’ pay, an increase from eight to 12 in the maximum number of hours they can work in a shift and the possibility for controllers to work alone.

The government says it has accepted the proposals on safety and that talks are now focussing on salary issues, but that the controllers’ expectations are too high, especially given decreases in air traffic due to the COVID-19 pandemic.

The air traffic controllers’ union says its safety concerns have not been adequately addressed and that the government is misrepresenting how much they earn.