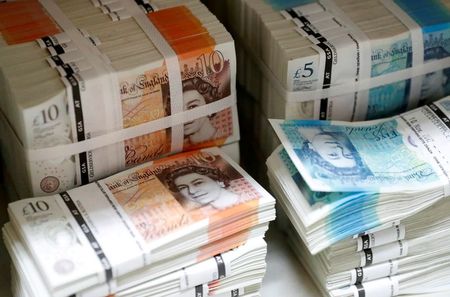 In prepared remarks for a speech to the Jackson Hole economic conference, Powell signalled the U.S. central bank will remain patient as it tries to nurse the economy back to full employment, repeating that he wants to avoid chasing “transitory” inflation.

The lack of a concrete signal about potential tapering of the central bank’s stimulus programme knocked the dollar lower, helping the pound gain some ground, rising 0.5% to $1.3781. That was its highest level since Aug. 18.

The gains set the pound up for a 1% gain against the dollar this week and its first weekly rise since the end of July.

“It’s more of a dollar move than a GBP one, with the market having taken Powell’s remarks as more dovish than was expected, and ‘selling the fact’ having been positioned for a hawkish speech all week,” said Michael Brown, senior market analyst at Caxton FX.

“I doubt that the jump has much longevity about it, however, particularly with the jobs report next Friday, the UK economy losing momentum faster than the U.S., and attention soon to rapidly shift to the September FOMC (Federal Open Markets Committee).”

External drivers, such as movements in the dollar on the back of risk sentiment in world stock markets, have largely driven sterling in recent weeks.

Earlier this year, Britain’s pace of COVID-19 vaccinations and a broader reflation trade in global markets allowed the pound to be the best performer among its G10 currency peers, but it has since lost that lead as the U.S. Federal Reserve begins to hint towards future tapering of its stimulus.

Hints about future tapering as well as uncertainty over the spreading Delta variant of the coronavirus have in turn dented risk sentiment and fuelled a bid for the dollar.