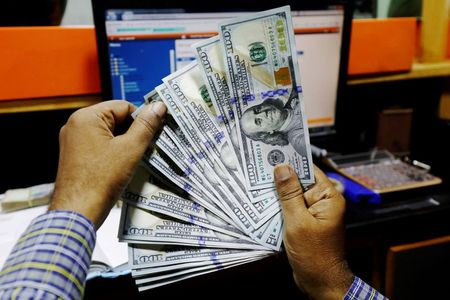 About a month of dollar gains had already lost momentum leading in to Wednesday’s Federal Reserve meeting and Chairman Jerome Powell’s remark that rate increases were “a ways away” was enough to tip it a touch lower still.

The euro edged to a two-week high of $1.1860 and the Australian and New Zealand dollars clung to gains made in a bounce on Wednesday. Sterling, which has been surging on optimism over the re-opening of the British economy, touched a one-month high of $1.3940.

The dollar index was softer for a fourth straight session, last trading at a two-week low of 92.110, while the Chinese yuan edged up to stand as high as 6.4691 per dollar in onshore trade and has now regained ground lost in tandem with a regulatory-driven plunge in Chinese equities on Tuesday. [CNY/]

“In the short-term, there’s been a reduction of taper fears, and that’s why we’ve seen the dollar heading lower,” said Jeffrey Halley, senior analyst at brokerage OANDA in Jakarta.

A CNBC report saying China Securities Regulatory Commission told brokerages on the call that China would continue to allow companies to list in the United States offered further support, as did solid rises in Chinese stock indexes on Thursday.

The Australian dollar was last up about 0.1% at $0.7379, capped by concerns over a lengthening lockdown in Sydney that is likely to drag on the national economy.

Recent resilience in safe-haven currencies such as the Japanese yen and Swiss franc suggests plenty of caution remains in currency markets as global coronavirus cases rise, yet at the same time sterling’s gains reflect optimism that the British economy can be re-opened as vaccinations progress.

The British currency is the biggest G10 gainer on the dollar this week. It climbed some 2.6% from a five-month low it touched last week to the one-month top it hit on Thursday.

The pound notched up its highest levels in almost four months on the euro on Wednesday. It has also made strong gains on the yen and especially on the Australian dollar, against which it is up 3.6% from low touched in early July.

Though experts and Prime Minister Boris Johnson have cautioned it is too early to draw conclusions, England’s re-opening last week has yet to spark a surge in cases or in hospitalisations.

“At the moment, the UK’s (COVID) position is pretty good and I do think that’s had an impact,” said NAB’s Attrill.

Later on Thursday, traders will be looking at German labour and inflation data, European sentiment surveys and second-quarter U.S. GDP – where the consensus is for 8.5% annualised growth, albeit from a wide range of forecasts.