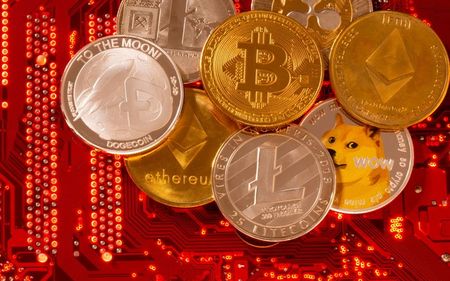 Asked during a congressional hearing if having a digital currency issued by the Fed would be a more viable alternative than having multiple cryptocurrencies or stablecoins emerge in the payments system, Powell said he agreed. A stablecoin is a cryptocurrency that attempts to peg its value to a conventional currency such as the U.S. dollar.

“I think that may be the case and I think that’s one of the arguments that are offered in favor of digital currency,” Powell said during a hearing before the U.S. House of Representatives Financial Services Committee. “That, in particular, you wouldn’t need stablecoins, you wouldn’t need cryptocurrencies if you had a digital U.S. currency – I think that’s one of the stronger arguments in its favor.”

Fed officials will be broadly examining the digital payments universe in a discussion paper that could be released in early September, Powell said. He described it as a key step that accelerates the Fed’s efforts to determine if it should issue a central bank digital currency, or CBDC.

Powell said he was skeptical that crypto assets would become a main payments vehicle in the United States but said stablecoins might gain more traction. However, he said more regulation is needed before stablecoins could take on a bigger role in the financial system.

“We have a pretty strong regulatory framework around bank deposits, for example, or money market funds,” Powell said. “That doesn’t exist currently for stablecoins, and if they’re going to be a significant part of the payments universe – which we don’t think crypto assets will be but stablecoins might be – then we need an appropriate regulatory framework.”

Powell’s remarks were in line with those of Fed Governor Lael Brainard, who said in May that households and businesses could be harmed by a fragmented payments system that featured too many stablecoins.

Fed officials may face intense debate as they figure out whether to move forward with a digital version of the dollar, with some policymakers saying a CBDC is not needed.

Fed Vice Chair for Supervision Randal Quarles said in June that he thought any proposals for a CBDC would need to clear a “high bar.” “Before we get carried away with the novelty, I think we need to subject the promises of a CBDC to a careful critical analysis,” Quarles said.

On Wednesday, Powell reiterated that if the Fed were to move forward with developing a CBDC, it would consult with Congress and the public. He repeated his view that as the holder of the world’s reserve currency, it would be more important for the United States to “get it right” than to move quickly.